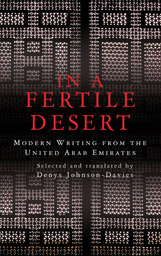 In a Fertile Desert: Modern Writing from the United Arab Emirates


The lyricism and haunting sound of traditional Nabati poetry has nowhere been more celebrated than the United Arab Emirates. While the poetic tradition remains rich, experimentation with prose and the formulation of short stories by Emirati writers came much later than in other countries of the region. As the book’s introduction explains, while capital cities such as Cairo were producing novels and short stories in the 1930s, the Emirates started to introduce this type of literary expression approximately 40 years later. However, they have had no lesser impact.

In a Fertile Desert is a gem of a volume, both showcasing and cementing 20 Emirati authors, of whom eight are women, in their talent and worth as writers. Translated by pioneer literary translator Denys Johnson-Davies, who himself lived in the Emirates during the 1960s, the volume includes stories of varying length from writers across each of the seven emirates. It is hoped, Johnson-Davies writes in his introduction, that In a Fertile Desert – the first ever published volume of Emirati short stories – will be followed by further compilations, which will propel local writers into global view. Banipal 42 – New Writing from the Emirates, featuring poetry and novels as well as short stories, is a great follow-on.

Each of these twenty short stories provides valuable insight into the UAE – its history, the tough nature of life there before the discovery of oil, the expansion and development of modern living and the conflicts that this sometimes causes.

Perhaps the most prolific writer is Mohammad Al-Murr, Deputy Chairman of the Dubai Culture and Arts Authority and author of at least 15 volumes of short stories. His story “Two Neighbours”, published in this collection, is a unique and humorous metaphorical take on birth, life and death. The tale centres on a conversation between two newborn babies in a hospital, talking about their lives to come, and forms a fantastic insight into the fragility of the human condition, with a sprinkling of ironic humour. Mohammad Al-Murr is also one of the most renowned writers in the UAE, especially for his stories “The Wink of an Eye” and “Bleeding Heart”.

A pioneer of Emirati short story writing, Abdul Hamid Ahmed mixes the controversial with the notion of freedom of speech in “A Slap in the Face”. A young male student heading for the city from his home in Khor Fakkan makes an indecent proposal to an attractive woman he spots on the street. Horrified, she calls over a policeman and the student makes the mistake of arguing freedom of speech with the officer. A slap round the face and a stay overnight in jail is all that awaits the young man before going home to his friends. Abdul Hamid Ahmed published three volumes of short stories Al-Sibaha fi Aynai Khaleej Yatwahash (1982), Al-Bayader (1987) and Ala Hafat al-Nahar (1992). He is now editor-in-chief of the English daily newspaper Gulf News.

The women authors include Sheikha al-Nakhi, one of the earliest of Emirati short writers, while well to the fore with published short story collections are Maryam al-Saedi, Ebtisam al-Mualla and Rowdha al-Balushi, Maryam Jumaa Faraj, Salma Master Seif and Aishaa al-Za’aby. Lamees Faris al-Marzuqi, another contributor, has also published a novel and two collections of poetry.

In a Fertile Desert is a comprehensive first collection of Emirati short stories in translation, collected from across the UAE and from authors of all ages and experience, male and female, both established and emerging.

From Banipal 42 - New Writing From the Emirates