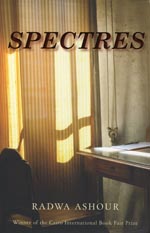 The Fabric of Historical Pain

With all the events now surrounding the Arab spring, Spectres reflects on education and activism in Egypt as part of the background narrative. Ashour chooses a refractory format to blend in two narratives: one of herself (autobiographical) and the other of Shajar. There are many Shajars, as there are several beginnings. Ashour finally settles on a Shajar in her fifties, an academic in the midst of overseeing exams and grading a large number of examination booklets.

The early part of the book is a memoir of the education of a young girl attending a French co-ed school in 1956. The scenes reflect on the nationalization of schools, with Egyptian teachers hired to teach history, geography and civics or National Instruction (a new subject). Ashour aptly describes this post-colonial era – the few Europeans teachers who stayed behind, bullying and bestowing contempt at their students. Politics in those early years was not far behind: an innovative young history teacher is arrested on charges of communism. Ashour successfully brings together various threads – the backgrounds of grandparents who moved from the Delta to the city, the culture and importance of education to the middle class. None of the details are forced, whether it be Umm Kulthum or the clunky furniture that overcrowds her grandparents salon (does one need reminding of the needlepoint upholstery of pastoral European hunting scenes?). For those of us familiar with the landscape, these details are fondly noted.

Politics affects the lives of ordinary people. Radwa Ashour, who is a professor of literature at Ain Shams University in Cairo and married to the Palestinian poet Mourid Barghouti, remembers and relates the many junctures where she was forced to part and was later able to reunite with her husband and son (Budapest, Doha, Emirates, Algeria, Morocco, Amman). One can always link one juncture or another with events that have marred the political consciousness of Arabs for the past fifty years. Ashour covers activism: Egyptian student sit-ins in 1972, and arrests and imprisonment of intellectuals and academics by Nasser and Sadat. Teaching is also a political act, and the university (and its politics) reflects the corruption of society at large – here again, the students seek guidance. There is nothing romantic in all of this. Egyptian students show up to lectures in overcrowded auditoriums, barely able to hear the lectures, under yellowish light.

The narrative closest to Shajar’s heart is the massacre of Deir Yassin. Presented as a research paper at a conference, the inhabitants are some of the spectres in this book. They are “called up”, named and described amid the terror and confusion as testimony against the Zionist project. Shajar’s paper gets a cold reception at the European conference. Sabra and Shatila are also described – again spectres to horrific crimes against unarmed civilians. Ashour/Shajar pertinently ask whether it is in the power of any historian to follow the threads that make up the fabric of his life. The end of the book lets us know that narrative is personal pain. Evoking the ancient Egyptian image of the woman/cow goddess forming a roof over the horizon with arms and legs as pillars, Ashour asks if the mouth would open to release words “brighter than beams of light, swifter than hunting dogs, lighter than shadows.”

The novel comes with an explanatory index that should help those unfamiliar with the history of the area. Barbara Romaine delivers a fluid translation. A few minor mistakes could have been picked up by a copy-editor, for example referring to the grandmother as the mother (p. 43) or the jarring English idiom on page 87 (“Shajar will bring disaster upon you! If the university doesn’t expel her, I’ll eat my hat!”) that does not exist in Arabic, but in the end we do have a readable narrative.