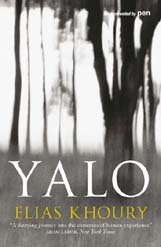 A brief summary of Yalo could make it sound like the latest Robert Ludlum thriller. In a war-torn country, a man accused of conspiracy and rape is subjected to shocking tortures in an atmosphere of paranoid politics and international intrigue. The tale is riddled with sex and violence plus a good deal of grotesque, sometimes obscene imagery. But the fact is that Yalo is not a thriller at all despite its lurid contents.

The story goes like this: In post-civil war Lebanon, a young ex-militiaman Yalo (nickname for Daniel) is not readjusting well to peacetime. Working as an armed guard of a rich man's villa, he begins raping and robbing people who come for surreptitious sex to a nearby Lovers’ Lane. The uneducated thug falls in love with one of the women he rapes, pursues her, trying futilely to win her heart, and though he is rejected in the end by the upper-class woman, he becomes less brutal and a potentially decent human being through his love for her, or so the author implies. In the end, Yalo is absolved of the more sinister conspiracies, but sentenced for his common crimes.

These bare bones of the story, however, don’t convey its disorienting experimental texture. Indeed, one of the most striking qualities about this novel is the way the author subverts the linear nature of narration and turns it into something closer to random access. If you’re looking for one coherent continuous story, you won’t find it here. Rather you will find multiple versions of Yalo’s life and crimes told and retold as he undergoes a set of gruesome tortures that not only damage his body but also fragment his mind. And since the novel is told from Yalo’s point of view, the impressionistic vortex of his mind is our only source of information. The challenge is that this information is often expressed in non-literal language, so that at times we have to wade through prose saturated with Yalo’s personal myths, images and symbols.

The torture that Yalo undergoes, for example, is brutal but never literal, bodily but not pornographic. Here he is on “the throne”: “Blood was. The hawk was. Pain was. Then suddenly the body left its owner and went to a place of pains too many to number. He saw it moving away and plunging into a pool of pain.”

The torture imagery turns into a bizarre sexual fantasy in which he becomes a squid making love to Shireen, another squid. The squid imagery naturally leads to ink: “He dived into the depths, stretched out his eight hands and flew through the water . . . he squirted his ink to mislead them, and the ink came out the colour of blood.”

And of course, ink links to Khoury’s ultimate topic, which is writing itself. Yalo, you see, has been assigned the task of writing his confessions. Although these are as confused as his thoughts, the process of self-creation by means of that mystical substance ink helps Yalo to reach truths about his life that although irrelevant to the police show the reader that Yalo has understood his crimes and matured.

Khoury’s theme is the effect on the human mind of torture, shown through many vivid and excruciating scenes but in which the language prefers to illuminate rather than deliver the Ludlumlike thrill: here Yalo ironically congratulates his tormentors for the “inventiveness of the forms of torture you employ and on your capacity to extract confessions from the accused as easily as extracting his soul . . . However violent torture may be, its physical effects wear off quickly and all that remains is the spiritual effect, which makes you feel the soul is about to depart.”

Despite the tight focus on Yalo’s torment, the exterior settings and culture of Lebanon and Beirut still come through – especially in Yalo’s reveries of his Assyrian family, dominated by his grandfather, a priest of their sect, who still remembers the ancestral massacre of Ward Ein in Kurdish Turkey and tries to keep the quaint old (Eastern Christian Orthodox) practices going. Khoury’s highly concrete and sensual style not only reflects Yalo’s basic maleness but also the hedonistic culture of Lebanon.Though linguistically I can’t judge the faithfulness of Humphrey Davies’ translation to the original text in Arabic, I can say that what I hear in this text is a coherent voice – that of Yalo and no one else.