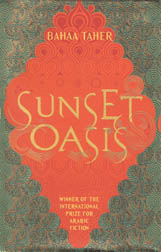 
When the Egyptian author Bahaa Taher won the inaugural International Prize for Arabic Fiction (IPAF) in March 2008 for his 2007 novel Sunset Oasis he received, in addition to the prize award, the guarantee that his novel would be translated into English.

This assurance of translation was in line with one of the prize’s chief aims: to make Arab literature better known in the West through translation. IPAF is sponsored by the Emirates Foundation of Abu Dhabi in association with the Booker Prize Foundation of London, and is often dubbed “the Arabic Booker”. The translation and publication of Sunset Oasis just 18 months after winning the inaugural prize is an indication of the prize’s value in widening the international audience for Arab fiction.

The publication of Sunset Oasis by Hodder & Stoughton under its Sceptre imprint follows the recent issuing by fellow UK publisher Arabia Books of an English translation of Taher’s 1985 novel As Doha Said, in association with the American University in Cairo Press. Taher is exceptionally well served by the translators of the two novels. The translation of Sunset Oasis by Humphrey Davies1 is admirably clear and well judged. Peter Daniel captures the engaging, conversational tone of the first-person narrator of As Doha Said, and the delicate sensuality of passages in which the narrator encounters or recalls his beloved Doha.

The two novels, which are separated by more than 20 years, are in a sense complementary. Both are rich, multilayered works replete with irony, and are susceptible to several readings and interpretations. Both are set in the aftermath of a revolution, and have as their central character a disillusioned intellectual who has lost his moorings.

Sunset Oasis is set at the end of the 19th century, some 20 years after the failed Urabi revolution which led to the 1882 Anglo-Egyptian war and the long-term British occupation. As Doha Said begins the day after the issuing, in 1962, of a nationalisation decree that closed down the Cairo Stock Exchange ten years after the Nasser revolution of 1952.

The central character of Sunset Oasis, police major Mahmoud Abd El Zahir, is posted as district commissioner and tax collector to the rebellious Berber-speaking oasis of Siwa in the far west. The posting is in effect a punishment for suspicions over his position during the Urabi revolt. The people of the oasis are divided into two feuding clans which are, however, united against outsiders. Although Mahmoud loathes the British occupation, he now finds himself in the position of an occupier. He faces a mission impossible: Siwa’s inhabitants killed his two predecessors. The fictional Mahmoud was inspired by a real person, Mahmoud Azmi, who as district commissioner of Siwa carried out a spectacular act of destruction. This act is the climax of Sunset Oasis; the other details of the novel are the product of Taher’s imagination.

Sunset Oasis has a complex narrative structure, with each chapter taking the form of a first person interior monologue delivered by one of the characters. This mosaic-style narrative reveals the intricate political and personal power plays between the characters. One chapter is narrated by Alexander the Great, who went to Siwa to consult the oracle of the god Amun (Zeus), and was hailed as Amun’s son. The priest told him the gods had chosen him as Pharaoh of all Egypt. Alexander looks back self-critically over his military conquests, and says he learned from the Egyptian priests that fear, not wisdom, is the basis of rule. “Amun inducted me into the ranks of the immortal gods and I believed in that, so I behaved as a god and tried to recreate the world and mankind.” Mahmoud’s Irish wife Catherine insists, against all advice, on accompanying him on the hazardous desert journey to Siwa. She has a project of her own: to prove that Alexander was buried in Siwa. She also hopes to revive her deteriorating union with Mahmoud.

Taher’s descriptions of the desert landscape are arrestingly beautiful. During a sandstorm that almost buries the couple, Mahmoud welcomes the prospect of death. “Let it come quickly! I want the end, as a beautiful relief from a burden I can no longer carry.” He tells Catherine that inside him stretches “a desert full of voices, and people and images”.

Catherine is adventurous and intellectually curious, and shares with Mahmoud a detestation of British colonialism. She is a widow, and with Mahmoud finds the sexual fulfilment that had been lacking in her first marriage. When she confronts him over her near certain knowledge that he has been unfaithful, he admits this is the case and claims that one woman is not enough for him. Mahmoud secretly yearns for Ni’ma, the household slave girl with whom he grew up. Ni’ma captivated him with her beauty, her storytelling and her lovemaking, but one day she vanished and he failed to find her in weeks of searching. Losing Ni’ma is one of his main regrets.

Catherine’s single-mindedness in pursing her investigations of the connection between Alexander and Siwa verges on arrogance. She tramples over the customs and social codes of the oasis and alienates its inhabitants. Her behaviour has disastrous consequences for Maleeka, Sheikh Yahya’s extraordinarily beautiful niece who was married off as a young teenager to an old man from the rival clan. A natural rebel, Maleeka fled her husband, and asked for a divorce, infuriating his clan. Now her husband has died and as a widow she is expected to be imprisoned for the traditional four months. On the day of her exit she will be regarded by the other inhabitants as “the ghoul-woman”.

Maleeka breaks out of her incarceration and seeks out the friendship of Catherine. Seeing a Sapphic intent in Maleeka’s approaches, Catherine reacts with a mixture of horror and arousal. Meanwhile, Mahmoud finds himself falling in love with Catherine’s sister Fiona who arrives at the oasis in precarious health. She is a more beautiful, more intuitive version of Catherine. The caravan that transports Fiona to the oasis brings with it Captain Wasfi. Mahmoud comes to loathe this Circassian officer who speaks against the Urabi revolt, affects British manners and says “it is the British who reveal to us the Ancient Egyptian antiquities and their greatness, while we know nothing about them”. Mahmoud is spurred into finding within himself the courage and decisiveness that had eluded him ever since the Urabi revolt.

Egypt’s ancient past also mingles with political realities in As Doha Said. Doha, the bewitching woman with whom the first-person narrator falls hopelessly in love, claims to have identified with the goddess Aset, or Isis, since childhood. Doha is beautiful, sophisticated, mysteriously well connected – and married. Her husband, who had had a powerful position in government before the 1952 revolution has lost his job and his land and has turned to gambling. When Doha is hospitalised, the narrator discovers she is suffering from alcohol poisoning.

Doha and the narrator are sent on a training course in Rome, and their attraction blossoms into a passionate affair. Doha alludes to the legend of Aset and Osiris when she tells the narrator not to despair: she will gather his scattered limbs and he will be whole again. He replies: “No Aset . . . I’m not Osiris. I’m dismembered on the inside.” The narrator’s idyll with Doha is short-lived, and he is left nursing his wounds after she abruptly rejects him.

The novel looks at the impact of the Nasser revolution on several characters besides Doha. The narrator had hoped that justice would prevail after the revolution, but had seen instead “the rise of a new class of kings and pashas who wanted to take over the country for which Hatem and I had been ready to sacrifice our lives”. As schoolboys he and his friend Hatem participated in anti-British demonstrations and he had saved Hatem from being shot by a soldier’s bullet. He is languishing in the Supervisory Board for Administrative Organization, referred to by Hatem as “the graveyard”, while Hatem has used the political organisations spawned by the revolution to make a swift ascent within his ministry. Another important character is Sayyid, who had been the parking attendant for the Stock Exchange and is from a desperately impoverished rural background. When the exchange closes the narrator help to him find a job through Hatem, and he attains a position of some influence within the ministry. There is antagonism between him and Doha, and he plays a part in her eventual downfall.

Taher, who is 74 this year, has long been highly regarded in Egypt and elsewhere in the Arab world. The publication of Sunset Oasis and As Doha Said means that four of his six novels2 are now available in English, and will help boost his stature on the international literary scene.


1 Humphrey Davies was the inaugural prizewinner in 2006 of the Banipal Prize for Arabic Literary Translation.