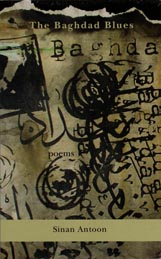 
Evoking more than devastation and death

When poetry is classified according to theme, war poems compete with political poems as the least appreciated genre; but so long as there are wars we must and we shall have poems on that theme. Poets who have survived the war experience won’t be able to avoid writing about it, if only to unburden themselves of demonic memories. Meanwhile, it’s impossible to prove that artworks about war have never contributed to political initiatives bringing it to a speedier conclusion; and the smallest chance that they might do so justifies such works, quite apart from their purely aesthetic value.

Sinan Antoon, poet, novelist, and translator, is an Iraqi exile who left his home country in 1991 shortly after the First Gulf War to live in the United States and complete a PhD in Arabic literature, which he now teaches at New York University. Because he appends a date and in most cases a location to each poem, we see that the opening three poems of this volume were written before he left Baghdad – in response to the Saddam Hussein regime and the First Gulf War. Thereafter (with one exception), all the poems carry a dateline no earlier than 2002, and roughly half are concerned with the US invasion of Iraq, seen from the vantage point of exile. It’s a stereoscopic view of war in Iraq during the past two decades, an image formed on one side by a direct experience of war, and on the other by an imaginative transformation of reported facts. You might think that the lived encounter would be presented as the more terrible, but the poems don’t support that assumption, either because the second war, apparently interminable, has been the more devastating or because the author’s painful feelings about the invasion and occupation include the recognition that his exile spares him from the destruction, deprivation, and humiliation undergone by his fellow citizens. And yet, as these poems demonstrate, he is able to appropriate and summon up a horrific representation of their sufferings, as in “Wrinkles on the wind’s forehead”:

This is not the first time

as they don our bones

The parenthetical “t” allows one word to invoke two perspectives, just as the authorial “our” is attached to blood and bones belonging in reality to the war dead. If “the” were inserted before “horizon’s” the penultimate line would read more idiomatically – a slight error pointing up the fact that these poems, first written in Arabic, have been translated by the author himself. Overall, though, they seem to inhabit their second language very well and come close to convincing us that it is their first.

The capacity to contemplate horror by means of imaginative sympathy wears out quickly, and Antoon has wisely made this a short book. Also, among terrible depictions of death and destruction he intersperses a series of tender love poems, which provide a helpful thematic and tonal contrast, just as they give us another reason why we do not want war. Its traditional alternative in poetry is love; therefore, poems celebrating love are, implicitly, anti-war poems. Freud divided the basic human drives into Eros and Aggression, the two conceived as functioning in dynamic tension. Influenced by Freud, Auden’s great “September 1, 1939,” a poem conceived on the first day of the World War II, announces that, “We must love one another or die.” In Baghdad Blues Antoon evokes devastation and death, but also insists on an alternative; and in so doing he gives us a persuasive, unmilitary indictment of the armed conflicts that, already longer than World War II, have cost the lives of hundreds of thousands of his people.