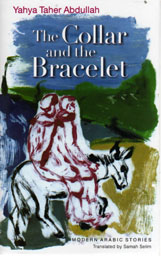 The Collar and the Bracelet


The world of the Cairo story-teller


Yahya Taher Abdullah died in 1981 in his early forties. He came from Upper Egypt, moved to Cairo where he led a vagabond life, his writing being his sole source of income. He published five collections of short stories and four novellas. Political activities led to his imprisonment and his writings reflect an acute social concern for the marginalised. Denys Johnson-Davies translated one collection of his stories, entitled The Mountain of Green Tea. This second volume is most welcome.

The collection contains a novella and a baker's dozen of short stories, some very short, the shortest being little more than a hundred words. The novella tells the story of three generations of the life of a family in a south Egyptian village. The young man is away for many years as a migrant labourer in Sudan and Palestine (before 1948), sending occasional remittances back home. His sister marries and has a daughter who dishonours the family and has to be killed by her uncle. The family's world is restricted by rigid convention, illiteracy and geographical isolation. The story is told with an economy of words, in a staccato way, with short chapters, themselves divided further.

The short stories are located mostly in Cairo. They are tales of alienation, dislocation, the struggle for survival in a harsh environment. "The Song of Elia the Lover" is about a lonely Saidi wandering around Cairo, dreaming about a girlfriend whose father, and so his family, has been exiled to the far south by his employers for insolence to his boss. 'Mr Sayyid Ahmad Sayyid' tells of another dreamer, an older man, in arrears for the rent of his one room, obsessed by reading, of all things, Bonaparte in Egypt by J Christopher Herold.

It comes as no surprise to learn that Abdullah used to recite his stories to literary gatherings, for the story appeals to the ear rather than to the eye. The translator has succeeded in transferring this stylistic feature into English. There is a translator's Afterword in which she explains some of the problems and challenges of translation. She has splendidly met the challenge.