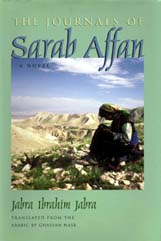 The Journals of Sarab Affan

Infatuation or Love, Art or Artifice


This novel may be Jabra’s most experimental and personally revealing of his large corpus of works. Using a Faulknerian device of presenting first person narratives by each of his two main characters, he introduces us to a young supposed journalist, Sarab Affan, as she prepares to stalk an older celebrated homme de lettres and lawyer, Nael Imran, in whose latest novel Entering the Mirrors she sees herself reflected and imaginally desired. Then, after exploring her own psyche with meticulous insight and relish, she immerses herself in his in careful preparation for an accidental meeting. The unprepared but susceptible novelist now, in chapter two, turned diarist is met, flattered, intrigued, and finally beguiled as her “master of the Mirrors”. Despite the gaze from his late wife’s marble bust set ever before him in his bedroom, he succumbs to Sarab’s exceptional beauty, intelligence, and body, and recounts the madness and chaos of passionate love driving him to dangerous distraction and inspiration. (“From this sort of chaos words are born – blurred shapes on wayward paths.”) In chapter three, her second narrative account, she is enthralled away from this grand old lover by a younger Palestinian activist, and eventually disappears from Nael. In the last chapter, his second, there is depicted the bewildered state of a lover still bereft after two years of abandonment by love. Finally, they meet again, this time by chance, in a library in Paris where she has assumed her latest persona of a student. In the end she remains her ever to be created self, and to him, a lover, an illusion, an incarnated phantom, not unlike others, as his wife seems to say, he has loved before.

Each section is a work of dazzling introspection and mirroring on the nature of infatuation and love, of art and artifice. There is much richness hung on this simple story. One is reminded herein of Jabra’s legacy as a host of numerous literary and artistic occasions, as a philosopher with Apollonian thoughts on life and death, and on friendships without restriction to time or place or cultural differences. He is writing here from both memory and desire. Anyone who knew him recognizes many of his prominent friends, his beloved keen-eyed wife, his home, even a model for his remarkable Sarab, both real and imaginary.

His literary sensibility and symmetry of his many creations are of the highest order. He was indeed a great artist honoured in his time but not internationally to the extent he deserved. In this late work he reveals himself and his powers of imagination as the passionate lover he was. His cross-fertilizing translations were of great works of passionate creation – of Faulkner and Shakespeare – and stand as further legacy to the Arab world. He was a man of spontaneous gestures and encouragement of others’ creativeness. He was also a man in perpetual and profound exile, but was never destroyed by its condition. There are political shadows in these late pages, but the substance of his story is the mystery and triumph of love.

The English translation by Ghassan Nasr reveals two crucial things: the translator has fathomed the creator’s intention and has heard his voice. It matches the original in brilliance.

• In September 2008 Ghassan Nasr was named runner-up in the 2008 Saif Ghobash Banipal Prize for Arab Literary Translation for The Journals of Sarab Affan. For full details click here.