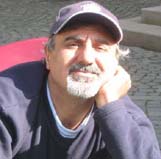 An Iraqi in Paris


I think it was in 1992 that I had in my hand the draft of a certain text, to check if it was good enough to appear in an Arab literary magazine published in Germany. The text was a part of an unfinished novel entitled Nostalgia to the English Time, written by an Iraqi called Samuel Shimon. I knew many Arab and Iraqi writers and had read most of them, but who was this Samuel Shimon who lived in Paris and wrote with such a distinctive voice? Not only was the theme of his text amazing, but also his unique and simple style that mixed intellect with humour.

There was also another reason why I felt his story was so familiar to me: the similarity between al-Habbaniyah, where the author spent his childhood, and Kirkuk, my own city. Both are multi-cultural and multi-linguistic. Many nationalities have lived there for centuries in peace together. The draft I was reading had been written in so simple a way that it gripped the reader, stimulating his or her imagination: an Assyrian boy of ten years and his deaf-mute father, returning home late one night from the bar. It is not only the father’s favourite game of “peeing as they walk along” that reveals the true bond between the drunk father and his son, but also their way of communicating with each other without words.

In the tales of his childhood, Samuel Shimon recounts a world full of passions and tiny pleasures. The family is poor like all other families in the neighbourhood, but no one complains about his lot; the father often looks without success for any job to earn some money to support his large family, but he doesn’t stop loving the Queen of England. And we hear the mother saying sarcastically: “Mad, this man is in love with a woman who wouldn’t employ him as a toilet cleaner.”

We feel the social misery everywhere, but it is always a silent misery. We see the whole scene through the eyes of a child who thinks the whole world is a film and he is only acting his role in it. This film has, of course, its director – God. Samuel’s guide in the jungle of this world-film is Kiryakos, his master. Like Virgil in The Divine Comedy, who led Dante through hell to paradise and taught him what he didn’t know, Kiryakos taught Sam the titles of all the American films and gave him what would brand his life forever with the stamp of fantasy – arriving in Hollywood to be one of its stars.

Following his dream, he wakes up early one morning, while his father and mother, his five brothers and sisters are still sleeping. He goes to his mother and tells her that he is going away and that she may never see him again.

“Where are you travelling, son?
“To Hollywood.”

Twenty five years later he will meet his mother again, not in al-Habbaniyah, but in America itself, and she will say to him: “Well, I arrived before you in America” and ask him: “Where have you been all these years, son?”

The prodigal son, who long ago reached the point of no return, stays silent. To tell the story of his life (remembering the teachings of his master Kiryakos), he has to record it first as a scenario and see it as a film.

An Iraqi in Paris (the title reminds us, of course, of a Hollywood film) is, perhaps unconsciously, the author’s long-dreamed of but unaccomplished film, some kind of compensation or attempt to arrive at his dreamland, even by other means of transportation. It is once more the prophecy of Kiryakos: “Sam, you will be a great actor in Hollywood some day.” Throughout the book Samuel sees himself as a hero in a film. The book begins with his long journey to the great and unknown world to reach his beloved Hollywood; like Odysseus “the man of twists and turns” on his way to Penelope, and like him also, Samuel will “turn, driven time and again off course”. In Damascus, in Beirut, in Amman, he will be arrested, interrogated and beaten for days, almost without reason, paying the price of his innocence and good faith. But he never considers what happens with him as tragedy, he never even cries. He takes his fate as a joke and has always, as a cunning young devil, his tricks to defend himself. In Beirut, accused of being a Syrian informer sent to spy on the Phalangists and with a gun at his head about to shoot him dead, he defends himself: “I want to make movies! I’m not a spy. . . I’m not like you and your friends, killing and smoking Gitanes.” Here, he falls in a trap when the hit-man asks him about the Nouvelle Vague of French cinema; he knows nothing about it, as Kiryakos never mentioned it. But our hero will not accept defeat and shouts out name after name of Hollywood stars. When he stops, the hit-man is laughing and calling him “Cowboy”. Death is averted.

An Iraqi in Paris is not only an autobiographical novel, but also a book of tales. The form of the book reminds us of the traditional Arab style of storytelling: no central plot, no psychoanalytical conflicts or approaches to the characters. The narrator, Samuel himself, does not stop in his telling of one tale after another, like Sheherazade in the Thousand and One Nights. What is important here is the adventure of the journey alone. We never see the hero of An Iraqi in Paris sitting in a corner contemplating the events of his life. He is always in a hurry, as if the whole world is waiting for him, moving from this café to that bar and from that bar to another café, hoping to find a friend who will invite him for a drink or perhaps to find a shelter with him even for one night. Samuel spent ten or more years on the streets of Paris and learned how to survive.

He finds himself among vagabonds, but he never loses his aristocratic inclination for luxury. He knows the best sorts of French wine and smokes only a certain brand of expensive cigarettes. His friends are not only the Iraqi and Arab writers in Paris, but also the barkeepers, the Moroccan and Algerian prostitutes and the Turkish restaurant workers. To secure his daily bread, his wine and cigarettes, he has to share with them their lives, their romances and often their madness.

Samuel Shimon derives his knowledge not from the books, but from life, a life which Kiryakos showed him to be a thrilling film, full of love and humour, kindness and humanity, dreams and illusions, a film now written as an autobiographical novel which we will read with delight and admiration.