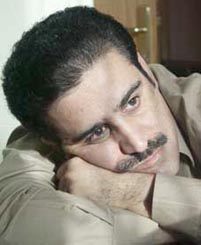 
The nomad, the orphan and the eunuch


Fikhakh al-Ra’ihah [Traps of Scent] begins with Tarrad, an elderly nomad, deciding to leave the city but hesitating at the ticket office window. Waiting around, undecided, in the bus station, he comes across a green folder left on a bench, that turns out to contain the documents of a social services case worker and which introduces into the narrative the second character Nasser, a foundling. Tarrad also meets Tewfiq – a Sudanese – kidnapped as a child, sold, emasculated and recently set free in his old age. Each of these three male characters has a physical deformity that can be traced back to the role of scent. Each deformity captures a definitive moment of powerlessness, around which each character defines himself and relates his story.

Billowing smoke from burning fat lured hungry Sudanese boys to a camp fire where they were captured by tribesmen, shipped to the Saudi Kingdom and sold as slaves. Hunger is humiliation: in remembering that hunger, Tewfiq remembers losing his freedom for a lump of fat (not even a decent piece of meat). His second more drastic encounter with smell was that of the anaesthetic from which he woke to the fact of his emasculation. For most of his life Tewfiq was confined to serving the women's quarters of the rich.

Born out of wedlock and abandoned in a carton in an alleyway, our second character, the foundling Nasser, loses an eye after being attacked by stray cats. Nasser’s folder reveals his sexual molestation by a Filipino carer in the orphanage. His story uncovers the sexual taboos of Saudi society (out of wedlock pregnancy, abandonment, child molestation) and his powerlessness is one consigned to repetition – he is adopted temporarily by a rich woman only to be sent back to the orphanage once she becomes pregnant. Nasser puts in a real appearance when a young man with one eye claims the green folder and disappears into the crowds of travellers.

Tarrad reveals the story of his missing ear at the end of the novel. He belonged to a poor nomadic family and supported his family by thieving, making a good living once he teamed up with another brigand. Caught in the act by a group heading to the Hajj, both brigands are punished by being buried to shoulder level in the hot sand and abandoned to a predictable fate. At nightfall, a desert wolf that traced the scent of their sweat attacks Tarrad’s ear and eats his partner’s head. The descriptive sections of Tarrad’s narrative echo the literary Arabic tradition of the sa’aleek – outcast poets in pre-Islamic Arabia who rejected the protection of the tribal system and set out to lead a life of brigandage and independence. Apart from the obvious symbolism of his name in Arabic, which implies exile/ displacement/ uprooting, Tarrad’s story connects the decline and weakening of the nomadic tribal system with poverty, which reveals a tattered social fabric incapable of protecting its own. Hence the moment of hesitancy and his indecision at where to go.

Traps of Scent is interesting in several aspects. The main theme – that of displacement – is disconcerting with its setting being one of the richest economies in the world, but one run by a migrant labour force, too, that can claim its share of displacement. For Yousef al-Mohaimeed, displacement is close to the surface; within an arm’s length, so to speak, as it can be found in a green folder forgotten in the entrance hall of a bus station. The stories of the three men make it clear how displacement is synonymous with (and symptomatic of) abandonment and fragmentation of the social fabric. Mohaimeed depicts it as having an almost animate existence in its rawness and crudeness, a nightmarish defencelessness where the maiming (in two out of three cases) is a result of being exposed and preyed upon by the stray and feral. Pride forbids these characters any self-pity; they are unable to forget or forgive themselves and it is during these many cycles of repetitions that Mohaimeed records his narrative.

The shortness of this novel contributes a sharpness with which Mohaimeed successfully and smoothly weaves two distinct narrative voices through the three histories, and shows a clear skill with the short story format, not least of which is the titling of each chapter.