Gate of the Sun was the winning translation in the First Award of the Banipal Prize for Arabic Literary Translation, awarded in October 2006 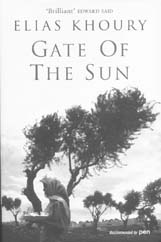 Gate of the Sun (Bab al-Shams)

Translated from the Arabic by Humphrey Davies


Palestine in the persistence of memory


At a book reading and round-table discussion of the English translation of Bab al-Shams (Gate of the Sun), Elias Khoury warned the audience that although he would read his work in English, the characters of his novel master this language – and ten others – much better than he does. Through this gesture, Khoury, an active intellectual in Lebanese and Arab public domains, emancipated the characters from the determinism of culture and the mastery of authorship. The characters, once created, engage in their own didactic encounters at New York University in English, at Paris VIII in French, and so on. These characters have come to life by telling their own stories over thirty years of interviews and conversations, collected by an author turned chronicler, in the Palestinian refugee camps in Lebanon.

Gate of the Sun’s compelling narrative structure is akin to that of the Arabian Nights and other pre-modern works of literature. From a hospital room in Beirut’s Chatila camp, a narrator stands over a comatose patient’s bed, telling him stories in the hope of bringing him back to consciousness. Khalil wants to bring Yunes back to life by telling him stories and repeating stories he had heard from Yunes himself. Khalil tells Yunes: “Our body is our history, dear friend. Take a look at your history in your wasting body and tell me, wouldn’t it be better if you got up and shook off death?” While Yunes’s coma is a metaphor for the collective vertigo of a people in their quest for home, storytelling is thus a resistance to death and an affront to unconsciousness.

From this hospital room, the stories of Palestine and the complexities of telling them emerge through a narrative mise en abîme. From the early days of the Nakba to the evacuation of Palestinian fighters from Beirut in 1982, to casual but meaningful encounters in the lives of various characters, the narrative goes back and forth, across time, space, and social and political context. Following the pace of memory, unconscious and whimsical, the narrative travels along with the characters, accompanying them through fields and valleys, into interrogation rooms and fantasized sites of desire, always listening and mediating their deepest emotions. Just like the refugee’s quest for home, the narrative searches ad nauseam for itself, its own truth, only to find it changed at the end and almost unrecognizable.

In capturing the disorientation of the journey, the novel subverts the teleological trajectory of departure and return. Khoury suggests that the story of the Palestinian people can never be told entirely and satisfyingly. Undermining the romantic idealization of home, he focuses instead on the fantasy of specific individuals, exposing their attachments, fears, and longings. Khoury introduces romance, betrayal, desire, and a series of vicissitudes that emerge as if to shatter the linearity of the narrative and to fragment its moment of origin. Palestine can neither be a place or a question, lost or gained, remembered or forgotten. Khoury moves beyond this dialectics by introducing a narrative structure that seeks to represent that which has thus far remained untold and unspoken.

For those who are looking for the “true” story or the “real” story of Palestine or of the Nakba, the catastrophe of 1948, they will not find it in Khoury’s novel. The story of Gate of the Sun is that of fragments and of individuals, sinuous and winding, but always told for life and for remembering. Khoury does not offer solutions or embrace ideological projects. As the novel progresses, the orphaned narrator with the “fractured spine,” whining and fixated on a lover’s betrayal and death, Khalil begins to question his desire to resurrect the father. Is bringing the father back to life a precondition for finding and saving oneself from complete forgetfulness? Is it possible or necessary to keep alive the go-between that connects the Palestinian refugees to the land of Palestine? As he becomes uncertain of the diagnostic of his malaise, this accidental doctor and storyteller reaches the following conclusion: “Now I understand why children fall sleep when we tell them stories: the stories infiltrate their eyes through the lashes and are turned into pictures too numerous for the eyes to process. Stories are for sleep, not for death.”
Though the stories are varied in their tone and scope, reading the novel from cover to cover could prove to be a daunting task. Therefore, one could also think of Khoury’s text as a mosaic that could be accessed at any point in the narrative.

In his adaptation of the novel, the acclaimed Egyptian director, Yousri Nasrallah (Marcides [1993] and On Boy, Girls, and the Veil [1995]), chooses to remain faithful to Khoury’s narrative structure, leading to a five-hour viewing experience. A two-part film with an intermission, Bab al-Shams (Egypt, 2004, 278 min) undertakes a visual storytelling that initiates the viewer to the vertigo of the Palestinian refugee. In Nasrallah’s film, the novel’s historical and literary narrative is rendered as a spectacle of sounds and colors, bringing to life the villages of Galilee in all their folklore. The first part of the film stages the epic unfolding of the Nakba, experienced as barbarity, heroism, betrayal, and loss. With elaborate war scenes and a highly evocative score, the film seeks to re-present the drama of 1948, tracing the displacement of the Palestinian people from the villages into the Diaspora. The second half of the film re-enacts the collective collapse of the heroic ethos of the Palestinian people in their quest for home. Thoroughly poetic, the film captures the magic of these stories and celebrates their unpredictability.

Both as a listener and as a writer, Khoury tells the stories of Palestine without ideology or idealization or guilt. And just as Nasrallah reads closely Khoury’s text, so does Humphrey Davies, the translator of the work into English. In a question to Yunes, Khalil says: “Where you surprised by the explosion of this Arab world that lost its soul a thousand years ago and today is flailing around in its own blood searching, and failing to find it?”

Hunphrey Davies’ translation renders Khoury’s work in all its brilliance, allowing the English reader to savour a thoroughly modern epic, made not of heroes, but of ordinary people. Gate of the Sun opens at the end of the age of heroism to brighten up dim hospital rooms and dark caves, and to bring into the light all the suffering endured in silence.