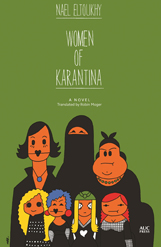 A Sort of Mad Fantasy

Nael Eltoukhy, born in 1978, is an Egyptian author and journalist who graduated from the Hebrew Department of Ain Shams University, and who has also translated several works from Hebrew to Arabic. His short story “The Machos” appeared in Banipal 43 in a translation by Wiam El-Tamami. Women of Karantina, his fourth novel, was published in Arabic as Nisa’ al-Karantina in 2013, and was recently shortlisted, in its English translation, for the inaugural FT / OppenheimerFunds Emerging Voices Awards.

Characterised by the translator himself on the Arabic Literature in English webpage as “a savage comic epic, relentlessly ironic, uncompromisingly rude, profoundly moral, totally true [and] good value for money”, this sprawling work, which runs to nearly 300 pages in English translation, seems impossible to classify. Best described, perhaps, as a sort of mad fantasy, it is a “future history”, whose opening chapter starts with a hungry dog rummaging through the trash on March 28, 2064 – “the grimmest [day] in Alexandria’s history” – and whose “plot”, if one can use the term, leads us through three generations of gangsters, madmen, and a cast of characters from the Egyptian underworld who play out their dreams and family feuds amidst the decaying suburbs of Alexandria over a period of fifty years or so. The story itself (the fabula, that is, as opposed to the syuzhet) begins not in 2064 but in the early years of the twenty-first century, with a pair of youthful lovers, Ali and Inji, caught up in an incident in Cairo’s Ramses station that sees a man turned to mincemeat beneath the wheels of a train.  Forced to flee the capital, the pair quickly establish themselves in Alexandria, the “City of the Sea”, at the centre of a network in which drugs, prostitution, violence, and inter-gang rivalries play a prominent part – a world that centres on the Alexandrian suburb of Karantina, and which comes to a bloody, violent end when the authorities, exasperated by the activities of the gang warfare being waged not only above ground but in the tunnels beneath it, decide to clear the area once and for all.

Despite drawing heavily on Egypt’s recent experiences, and despite its references to contemporary and historical events – to the policies and activities of various governors of the city, to the Khaled Said affair and its aftermath, and to the “iniquitous dispensation of Mubarak and his family” – it would be hard to argue that this was a novel with deep roots in the so-called “Arab Spring”. Indeed, once the chain of events has been set in motion with Ali and Inji’s arrival in Alexandria, the narrative develops a logic and momentum of its own that only occasionally seem grounded in present-day reality.

Notable in Eltoukhy’s novel is the prominent role played by women in the events depicted: it is not for nothing that the last of the work’s three sections is labelled “Female Empowerment: seven women who ruled the world” (p. 209). What also emerges at an early stage is a keen sense of Alexandria as being different from any other place in Egypt – a “cosmopolitan city . . . at least, that is what it was before the revolution of July 1952”, the traits of whose inhabitants include, most prominently, “rage”. “Your Alexandrian’s a nice enough fellow most of the time,” observes the narrator, “with the exception of those instances where he senses some outside threat, particularly . . . a threat directed at his Alexandrian identity.” But while rage and ill-temper certainly underlie many of the events depicted, an equally important component of the book is provided by Eltoukhy’s sarcastic brand of humour, which in true Egyptian fashion suffuses the whole account, sparing nothing and nobody. And that is not to mention the obscenities, of course . . .

Not having seen the Arabic text, I cannot comment on how Robin Moger’s assured and vigorous rendering compares with the original – though in light of the work’s length and complexity, one might confidently speculate that the translation process required a good deal of stamina, if nothing else. Indeed, if I have one complaint about the novel, it is that (for my taste, at least) it goes on for just a bit too long.

That said, this is clearly an exciting and original work, which represents an important contribution to contemporary Egyptian and Arab literature, and it deserves the success it has already enjoyed in being shortlisted for the Emerging Voices Award.

Back to Banipal 53 - The Short Stories of Zakaria Tamer