You are invited to join the discussion about African Titanics, with the translator Charis Bredin, at the Banipal Book Club on 4th June

For details of time and place, please click here 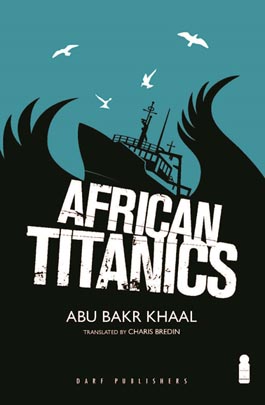 The turbulent swell of hell

Abu Bakr Khaal's African Titanics humanises and finds poetry in a major tragedy of our day: the mass drownings of migrants fleeing war and hardship on boats across the Mediterranean. Unscrupulous traffickers take migrants from across Africa to the “liquid hell” of the sea where they face a high risk of death trying to reach Europe aboard unseaworthy or abandoned vessels nicknamed “African Titanics”. The novel’s author is an Eritrean who lived in exile in Libya for many years. During the 2011 Libyan revolution he spent months in a Tunisian refugee camp, and he now lives in Denmark. Though his novel is slender it has an epic quality, ranging over vast spaces and drawing on African history, magic, stories and songs.

The first-person narrator, Abdar, is an Eritrean who succumbs to the “migration bug”.  Abdar observes how “migration came flooding through Africa, a turbulent swell sweeping everything along in its wake. None of us knew when or how it would end. We simply watched, dumbfounded, as the frenzy unfolded.” He goes first to Omdurman in Sudan and eventually tracks down a people smuggler who agrees to drive him and more than twenty other migrants across the desert to southern Libya. During the 15-day journey the migrants suffer sandstorms, thirst and the threat of attacks by marauding tribesmen. Several die on the journey. Abdar watches as a young Eritrean woman, Terhas, tries futilely to keep a fellow migrant alive by hydrating him with her own saliva.

The spare and lyrical style of the novel, deftly translated by Charis Bredin, adds to the starkness of the characters’ predicament. Khaal takes us deep into the precarious existence of the migrants as they wait to cross the sea while constantly trying to dodge the authorities in Libya and then Tunisia. The migrants exchange stories and banter in their cramped temporary refuges, and friendships are formed. Abdar draws close to Terhas and to the Liberian guitar-carrying hereditary storyteller Malouk “whose departure left a deep well of sadness within me that still torments me to this day”. He recalls Malouk’s stories and the legends that sprang up around him. This novel sheds new light on the plight of Africa’s “boat people”, and deserves to be widely read.