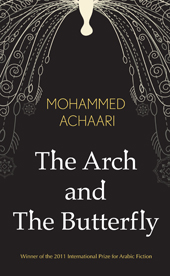 The Arch and The Butterfly

Born in 1951, Mohammed Achaari is a journalist, poet and short-story writer who has also served as Moroccan Minister of Culture and head of the Union of Moroccan Writers. The Arch and The Butterfly, his second novel, was originally published in Arabic as al-Qaws wa’l-Farasha in 2010, and shared the IPAF prize with Raja Alem’s Tawq al-Hamam (The Dove’s Necklace) in 2011.

Mohammed Achaari’s novel begins when his protagonist, the journalist and writer Youssef al-Firsiwi, about to leave for work, finds a single-line letter slipped under his door: ‘Rejoice, Abu Yacine. God has honoured you with your son’s martyrdom’. The discovery that his only son, Yacine, whom he believed to be in Paris studying architecture, has instead been martyred in Afghanistan fighting with the Islamist mujahideen, prompts Youssef to re-examine not only his present relationships, but also his past life as an Arab left-wing activist in a world in which the old values appear to have become increasingly irrelevant. Yacine’s disappearance, and the threat of terrorism, underlie (though they do not dominate) the narrative, right up to the novel’s dramatic last few pages, in which the narrator roams the streets of the old city of Marrakech, hoping to meet a contact who had travelled with Yacine to Afghanistan.

Cast by his son’s death into an apparent ‘wasteland’, Youssef turns for support to two friends, Ahmad Majd and Ibrahim al-Khayati, each of whom is himself caught up in dubious criminal or business dealings that reflect at least one face of contemporary Morocco – corrupt real estate deals being one of the most prominent features of the circles in which Ahmad moves. At the same time, Youssef’s personal life is thrown into disarray, as his marriage to Bahia collapses. Through the other women in his life – Fatima and Layla – however, he seeks to regain his sense of identity, and with Layla, whom he knows to be ‘the woman of my life’, and with whom he eventually adopts a daughter, Mai, one senses that he has indeed found some kind of fulfilment.

Achaari’s novel is a complex work, which defies convenient summary. Moving not only between the various cities of Morocco itself, but also encompassing Havana and Madrid, the author is clearly preoccupied with changing urban landscapes. Indeed, it is two architectural developments that provide the basis for the work’s at first sight enigmatic title: the first, a proposal made by Yacine for a giant steel arch to link the cities of Salé and Rabat across the Bou Regreg river; the second, a project of Ahmad Majd to build a massive, nine-storey butterfly-shaped building in the heart of the medina of Marrakech, with a nightclub below the ground floor, and luxury apartments at the top occupied by rich Gulf Arabs and a world-renowned French perfume-maker.

On one level, Achaari’s novel can be read as a family saga spanning three generations. As the product of a marriage between a German wife who committed suicide and a now-blind Moroccan father, Youssef, even before his son’s martyrdom, clearly belongs to the sort of dysfunctional, ‘cross-cultural’ set of relationships that have provided a constant stream of material for Arab novelists across several generations. Yacine’s apparent martyrdom does not end his relationship with Youssef, for he continues to haunt his father intermittently as a sort of ghost, talking to him in the street for hours on end; while Youssef’s own blind and enigmatic father, Mohammed al-Firsiwi, plays out the final stages of his own troubled life by working as a tour guide among the ruins of the Roman city of Walili (Volubilis).

Although Achaari’s The Arch and the Butterfly has been criticised by some previous reviewers for its lack of focus, its at times apparently untidy thematic structure (to which one cannot do justice in a short review) is to my mind no more than a reflection of the complexities of contemporary life. The multi-layered texture of the work certainly demands the reader’s full attention; but it is a rewarding and thought provoking read, and this near flawless English translation by Aida Bamia well confirms the decision of the IPAF judges to award it the prize in 2011.