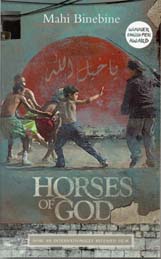 
The ghost of Yachine


Mahi Binebine is a well known Moroccan painter and since 1992 has authored nine novels, all dealing with the difficult, painful and often seemingly inexplicable issues that face people today as parents, families, politicians and human beings. The novel under review, Horses of God, has been adapted for the big screen as Les Chevaux du Dieu. Mahi Binebine studied and worked for a number of years in Paris, where until the late 1980s he taught mathematics, before devoting himself full time to painting and writing, and also living in New York and Madrid. Since 2002 he has settled in his home city of Marrakech.

The original novel, written in French, Les Etoiles de Sidi Moumen (Flammarion, 2010) won the Prix du Roman Arabe, the annual prize awarded by the Council of Arab Ambassadors in France in partnership with the Institut du Monde Arabe in Paris for works by Arab authors writing in French. It was also awarded the inaugural Mamounia Literary Prize of Marrakech. Translator of the English edition, Lulu Norman, who was awarded the 2013 English PEN Award for outstanding writing in translation for this translation, also translated Binebine’s Welcome to Paradise (Granta, 2003, original title Cannibales, translated by Lulu Norman, with an excerpt first published in Banipal 9 in 2000) which was shortlisted for the Independent Foreign Fiction Prize. Mahi Binebine’s novels have been translated into German, Portuguese, Spanish, English and Korean.

The painter’s eye of Mahi Binebine is transformed into a powerful voice with a resonating vision that echoes long after the book is put down. But in Horses of God it is not the vision of the destruction caused by the real life suicide-bombing of the Casablanca hotel 10 years ago that one might expect from reading the back cover blurb. Rather it is the fateful “game of life and death” played inexorably by the shanty-dwelling poor and deprived kids of Sidi Moumen, where the “grim reaper was a part of everyday life” and where Yachine and his eight brothers live with their mother Yemma and unemployed father (2 siblings died before the sons could count as a football team). Yachine would play with the other kids, who gathered together by the town dump, and scavenged for stuff to sell, or sniff. But more than that, they would play football – they were the stars of Sidi Moumen.

In a clever device the narrator is the ghost of the dead Yachine, one of the suicide bombers, and through this the author slips into Yachine as he looks down on the scene below, remembering his passion for football that led him to change his name to that of his idol the footballer Yachine. The burials of Yachine and his older brother Hamid, and the terrible distress and grief of his mother are described poignantly and touchingly. The pain of the community is physical, “not a single kid’s shout”. As for Yemma, her “eyes had almost disappeared”, they were “dead, just like Hamid and me . . . ”.

They were young, the lads, when they first met Abu Zoubeir – fifteen, maybe sixteen. Hamid was first, and the others followed, drawn in, at first imperceptibly, beginning their “slippery descent into a world that would suck us in deeper and deeper and finally swallow us for good”. Yachine recounted how Abu Zoubeir had “given us back our pride with simple words”, and then he too was drawn in until he recited that “Jihad was our only salvation. God demanded it of us. It was written in black and white, in the book of books.”

Mahi Binebine, in Lulu Norman’s brilliant translation, is poetic, edgy, tragic-comic, and at times too painful to read. “We were dead, just dead”, says Yachine, but “still waiting for the angels”. Powerful food for reflection and thought. At Banipal we are pleased to have published a painting by Mahi Binebine on this issue’s front cover, and as well, earlier, on that of Banipal 9.