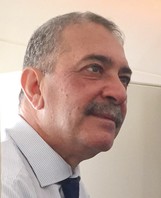 Was Fadhil al-Azzawi better as a poet or as a novelist? His career spanned both realms, each a testament to the vitality of his modernism, his prolific literary output, and his commitment to the role of the free and independent intellectual.

There are those who prefer him as a novelist rather than as a poet. There are also those who consider him a truly exceptional poet, responsible for fomenting a revolution in the modern Iraqi ode, after its transformation at the hands of the 1950s pioneers (al-Sayyab, al-Malaika, al-Bayati, and al-Haydari).

I was living in southern California in the San Fernando Valley having just started to teach at a California State University, Northridge. Northridge – in 1994 – was the site of one of the worst earthquakes and one of the costliest natural disasters in American history. The epicenter of the earthquake was Reseda, the town where I lived that year. My apartment was a spare post-graduate-school dwelling, with just books and more books, some still in boxes, an old TV and two old comfy chairs, alongside a working table.