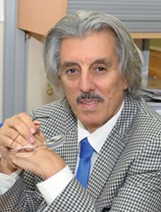 Excerpt from the novel Jaheem al-Rahib,

Father Charbel: the book priest. So Father Joseph called him. Running the library had been his overmastering passion for years now, only rarely sleeping in his room (his cell) due to his habit of sitting up surrounded by books till late into the night. He had left Mosul after the torching of the cathedral library and the reek of burning books had curled up to his nostrils and creased his face with rage. Had he by some chance stumbled across the perpetrator, he would have eaten him alive. He would wake to the ghosts of books and manuscripts and when such visions visited him he would scream like a man possessed, repeating the same phrase over and over:

It was after this incident that he wrote to Father Joseph in Lebanon, asking that he might come to the Monastery of the Icons, enclosing a report that listed the rare manuscripts and documents that had been destroyed since the Abbasid period. There were the fertile dialogues and debates with the Abbasid Caliphs from the time of Patriarch Timothy. Yes, indeed, Father Joseph, he wrote, muttering to himself: Timothy I, famed as the pioneer of Islamic-Christian dialogue. Timothy’s debates with Al-Mahdi, Al-Rashid, and Al-Ma’mun, his recommendations on how to resolve the conflict between the Alawites and the Hashemites, documents on the good relations between the Church and the Abbasids, most particularly Al-Ma’mun, who repeatedly visited the monasteries of Mosul with his retinue, and whose arrival once coincided with Easter and so he stayed fifteen days, ordering the monastery to be rebuilt. The chronicles of the Eastern Patriarchate, texts by Bar Hebraeus and the Unknown Edessan, an important document from Sultan Abdul Hamid recognizing the authority and influence of the Chaldean patriarch . . .

Reading Father Charbel’s letter, Father Joseph was overcome by gloom and sadness and felt that some part of his city’s history had departed along with the burned books and would never return. He wrote to Father Charbel, asking him to come to the Monastery of the Icons, and to try and save what volumes and manuscripts he could through restoration.

Then he asked him to establish a library in the monastery, which boasted a collection of the most important early works. Father Charbel continued to upgrade the library, asking Lebanese, Arab and Western publishers to donate a single copy of all their titles, and families even began to donate the collections of deceased relatives. Charbel dedicated himself to restoring the books and manuscripts. He even asked the monks and nuns to read them and to memorize sections of the Holy Book, the Lord’s Prayer, and the greater part of Psalms, and made novices learn the “ascetic’s ABC”: the virtues and duties of the monastic life. As for free time, the monks were obliged to spend it in reading from the Holy Book, which was memorized, by and large, and compulsory at the monastery.

While telling us about something written in one the manuscripts he suddenly burst out laughing: “A funny story!”

Then he fell silent.

“And what is the story, Father Charbel?” asked the monks and nuns.

His hands waved and gesticulated.

“The physician to Caliph Abu Jaafar Al-Mansur . . . Do you know who he was? He was the Nestorian Jurjis bin Jibril, who cured the Caliph of a chronic illness which had played havoc with his stomach. Upon being rewarded he delivered a famous speech in the Caliph’s presence in Farsi and Arabic. The Caliph permitted him to drink alcohol and, when he learned that the physician was intending to depart to Elam to visit his wife, who had grown old and housebound, Al-Mansur sent him three thousand dinars and three Byzantine slave girls in the care of the eunuch, Salem. But Jurjis returned the girls to the Caliph, saying: ‘O Commander of the Faithful, these girls cannot reside with me in one house, for as Christians we may not marry more than one woman. As long as my wife is alive, I shall marry no other.’ The Caliph was amazed that a man could turn down three beautiful Byzantine girls. Anyone else wouldn’t have hesitated to bed them together.”

The monks and nuns roared with laughter. Some covered their heads with their sashes out of embarrassment and delicacy.

Then the knockabout, merry Father Charbel went on:

“There’s another amusing story about this physician. The Caliph had once invited him to convert to Islam. ‘Convert and I guarantee you Paradise,’ the Caliph told him, but the physician was bold enough to answer: ‘I am content to join my forefathers, whether in Heaven or in Hell.’ The Caliph marvelled at him and praised and rewarded him, saying over and over: ‘O Christians, you are the dearest of all people to us.’”

Father Charbel would debate with the other Assyrian monks about the origins of monasticism and the memorization of the Psalms and the New Testament, which had been the basis of a Christian education in the early and medieval periods, though was not a process of rote learning, but a contemplative, intellectual exercise undertaken by the student.

“That’s true, Father, I agree with you about that, and it’s proved by the fact that they rejoiced in the words of the Lord and took pleasure in reading The Monks’ Garden as they sat to eat in the monasteries.”

Then he turned to me: “Father Ishaq, during the Byzantine period, the monasteries became repositories of ancient knowledge; indeed, they were responsible for preserving the heritage of the past, fearful lest it slide into lightless anonymity.

“Saint Pachomius himself, the first to draw up rules for the monastic life, made laws to protect the books and libraries, and copying rooms sprung up in the monasteries. He regarded copying manuscripts as a sacred duty in which monks and abbots must work together.”

“Have you heard of the monk copyists?” asked Father Joseph. “Ibrahim, Herax, Marallus and Saint Melania?”

“The copyists are blessed and their work is sacred, which is why a special prayer is said for the copyist, “The Copyist’s Chamber”: ‘O Lord, look kindly on and bless this copyist on behalf of Thy servants, that when they read or write out any holy text, they might understand it and benefit from it.’”

Father Charbel was no ordinary librarian, but a voracious reader into the bargain, reading ceaselessly day and night, offering advice on what to read, and helping researchers. I shall never forget the assistance he gave me over sources for my thesis. He encouraged some of the monks to copy torn books and rebind and decorate them, and taught them the art of restoration. The keys to all the books were in his hands and the monks would record their titles in the records and registers. But more than that, he transformed the monastery into a great pyramid of the tales and stories that lay between the library’s four walls, tirelessly probing the hidden caves and tunnels of its books and the spirits of their authors. He wrote and numbered and catalogued, staying up till dawn, spilling his pale lamplight onto the pages, wrestling with their shaky handwriting, and asking himself, in cheerful scholarly spirit: Were the authors magicians who transformed into bishops and priests and monks and angels and shut themselves away in this corner, repeating in our earshot: “Close your eyes a moment. You shall see Jesus in the letters of the books upon the library’s shelves!”?

There was no solitude in the library, as Father Charbel would say. The monk’s solitude was in his cell, and without these books he would never see further than the end of his nose. Those poor wretches who grow old, not one of them knowing what to do with his time or his life. The retired government worker might be kept occupied by family. The monk, meanwhile, leaves his cell to pray and eat, then returns to sleep, hoping Christ’s shadow will pass through his dreams. It was possible he might catch a sight of this shadow in the innards of his books, he should keep reading – and Father Charbel never hesitated to make this point to the novices, to encourage them to read and study and keep their young minds alert and open. These dust-covered tomes wait only for hands to pluck them out and eyes to break the code of their tangled letters and restore them to life: as though the pages were a lonely woman, caressed by the hands that came to turn them.

I would spend hours in the monastery’s library until I’d notice Father Charbel standing over me and saying: “Reading is the only way to dispel cold nights of sleeplessness, worry, and nightmares.”

I would lift my face to him and reply: “You’re right, Father Charbel. You live among treasures whose value no one knows but their readers.”

And just like that, Father Charbel took himself off amongst his books, scratching away in his large-leafed register with the Parker fountain pen that he’d kept in his pocket since his Mosul days.

To read the rest of the chapter, buy a copy of Banipal 53

Click to go back to Banipal 53 online Contents page