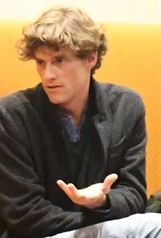 His translations include Yasser Abdellatif's The Law of Inheritance and Iman Mersal's How To Mend: Motherhood and its Ghosts, both published in 2018, All the Battles by Maan Abu Talib (Hoopoe Fiction, 2017), The Book of Safety by Yasser Abdel Hafez, which won the 2017 Saif Ghobash Banipal Prize for Arabic Literary Translation, and Otared by Mohammad Rabie (Hoopoe Fiction, 2016, also entered for the 2017 Saif Ghobash Banipal Translation Prize), Yousef al-Mohaimeed’s Where Pigeons Don’t Fly (Bloomsbury Qatar Foundation Publishing, 2015), Youssef Rakha's The Crocodiles (Seven Stories Press, 2014) and Yousef al-Mohaimeed's Where Pigeons Don't Fly (BQFP, July 2015), both reviewed in Banipal 52, Egyptian author Nael Eltoukhy's novel Women of Karantina (AUC Press, 2014), and Writing Revolution: The Voices from Tunis to Damascus (I B Tauris, 2013), which won the 2013 English PEN Award for outstanding writing in translation.