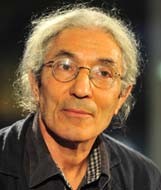 Boualem Sansal is an Algerian novelist and essayist, born in 1949, in Téniet el Had. He started writing novels after his retirement from his work as an Algerian government official. His latest and best-selling novel 2084: The End of the World (2015) has been jointly awarded the Académie française’s 2015 Grand Prix du roman, after being on the longlist of every French literary prize.  He has published seven novels, six collections of short stories and some essays.

Click here to read the review of Harraga by Paul Blezard in Banipal 52.