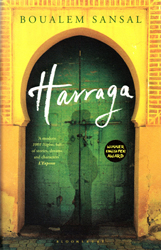 translated from French by Frank Wynne

“Would the real Algeria please be upstanding?”

It is a curiously enduring thrill to read works by authors who have attracted the unwelcome attention of authority. To know the life stories of Wole Soyinka and Orhan Pamuk while reading their great works adds a frisson, a visceral edge to their fiction through the risks they have taken to voice their thoughts on paper.

Sansal is another such author who has paid a high price for his clear-sighted views and honest writing. His criticism of the government led to his dismissal from his post as Directeur General de L’Industrie. The 2006 publication of Poste restante: Alger, lettre de colère et d'espoir à mes compatriots, his open letter to Abdelaziz Bouteflika’s government, led to the banning of his books. Yet he continues to live in Algiers, ‘in exile in his own country’ as some have put it, where he has garnered a worthy reputation as one of the country’s most important and internationally acclaimed writers.

His first work to be translated into English was published as An Unfinished Business (Bloomsbury, UK) and as The German Mujahid (Europa Editions, USA). It found literary champions and firm friends for its dark portrayal of Nazism’s past atrocities and Islamic fundamentalism’s contemporary wickedness. Harraga, first published by Éditions Gallimard in 2005, is only his second work in English translation and also deals with bleak tensions, in this case through a captivating and endearing tale of loss and love, rendered impressively into the English by the multi prize-winning translator Frank Wynne.

The four acts and an epilogue are narrated by Lamia, an emancipated, poorly paid paediatrician and misanthropic chatelaine of a colonial mansion whose history of owners is as rich as that of the ancien quartier of Algiers in which it sits. Prickly with her real neighbours and the imagined ghosts she resides with, her self-imposed social exile is spent mourning her parents and older brother and worrying about Sofiane, her path-burning ‘harraga’ younger sibling, who has fled to attempt the dangerous path of people traffickers and ramshackle boats hoping to get to England. Just thirty-five but with “the wrinkles of a sixty year old”, Lamia has no illusions about her brother’s expected fate:

“On the road the harragas take there is no turning back, every fall leads to another one, harder and more painful, until the final, fatal plunge. We’ve all witnessed it: satellite TV beams back the pictures of corpses lying broken on the rocks . . . in the back of a refrigerated van. As though we didn’t already have enough, the harragas have invented new ways of dying.”

Lamia’s scratchily peaceful routine of work, reading and avoiding gossiping neighbours is shattered one day by a fierce banging on her steel front door heralding the arrival of the story’s other main character, 16-year-old Cherifa. A pregnant, garishly-dressed, angelic waif who has been sent by Sofiane to stay with Lamia. Part Lolita, part Cosette, Cherifa enters like a djinn, coming and going at all hours as she pleases, leaving a trail of clothing, confusion and heartache in her wake. Lamia heroically struggles to resist caring for, or about, the ingénue cuckoo, but slowly the girl’s rustic naiveté and impending motherhood erodes Lamia’s urban, educated cynicism and she slowly assumes the multiple mantles of Mother, older sister, teacher and worrier.

Through a cast of wonderful characters: Tonton Hocine the aged handyman, a bus driver known only by his number and an illiterate postman, and with beautifully sketched scenes of Algiers and Algerian life, from the moribund zoo and city gardens to the faded grandeur of Lamia’s home, Sansal creates a symphonic tale with soaring melodies of enduring emotional truths set against the drone notes of daily hardships and harsh inequalities.

Often heavy of heart but with always with a wonderful touch, Sansal ranges over everything from national dissolution: “the pervasive atmosphere of violence, the constant Algerian bilge, the national navel gazing, the moronic male chauvinism that regulates society . . .” to the joy of the capital: “Algiers never ceases to amaze. Though it is a master of the low blow, it knows how to take care of its own and, when one of them is in the depths of despair, it never fails to throw her a lifeline” and: “Algiers is a trollop who gives of herself the better to take. Her going rate is five minutes of pleasure for one month of bitterness”. The misappropriation of Islam by fundamentalists gives the “Green plague of Islamofascism” and “Islam lapsed into Islamism and authority into authoritarianism” all seasoned with glorious references to Voltaire, Hugo, 2001: a Space Odyssey and Gremlins and with a score that encompasses Rachmaninov, Aznavour and “Ode to Hiziya.”

In part Lamia – so nearly an anagram of Islam – may represent old Algeria, traditional, tried, tested and good, making fickle, feckless Cherifa an avatar for the new, the 21st century, with the misinformed upstarts of new Islamism and the rootless disinterest in hard fought values and sensibilities. Certainly Cherifa shows no care for Lamia other than her ability to provide safe haven; an adoptive parasitic progeny feeding on the host, but to overstress this would miss the central theme.

For the sadness that underpins Harraga is that the word needs to exist and that so many of the disenfranchised, disconnected and destabilised risk all to build lives elsewhere, away from home and heritage. Path burning sounds heroic, but it is an act of woeful desperation born of calamity. While we may all be harraga in part, striving for brighter shores, as Lamia herself puts it: “To die so far from your grave is pathetic”.  How tragic that there is the need to do so.

Who knows if Algeria will become Lamia or Cherifa in time but, with Harraga Sansal has created a subtle, profound triumph on a subject of brutal necessity, a threnody to a people and a poignant, heartrending love letter to Algeria. As Lamia puts it: “Allah alone knows us by our lamentations.”