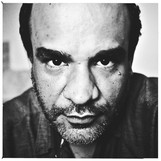 THE REVOLUTION FOR REAL: CAIRO 2011

After Allen Ginsberg’s “The Lion for Real”

O roar of the universe how am I chosen

I come home from Alexandria via Tanta to find the Revolution beneath my bed
And with bent torso in bedside lamp light, my face level with the mattress boards
I make out millions scurrying and defending themselves with stones, each a cigarette butt still sizzling
They raise placards like stamps and carve slogans bigger than their bodies into the parquet, I hear their chants

The last shot of vodka not yet evaporated from my skull after a possible lay never accomplished in Alexandria
my drunken bones crackle while I resist weeping, tearing off my clothes in the window:
the Revolution has happened, you sons of bitches, the Revolution for real!

I leave the house on Ibn Farid Street above the biggest pickle store in Tanta, my lover letting in condolence-paying Remnants of the Fallen Regime
missing neither lay nor sea, neither her mother’s face widowed hours before nor my father dead now for ten years
nor beyond the Shrine Café a Saint whose member (among the miracles) was bigger than the batons of the Military Police
but only my ear which got wet in Alexandria because her tears dripped from the mobile earpiece

I splash red ink onto my clothes and rush to work, lie down at the manager’s door
The Revolution was not with my co-workers nor at the Metro nor even in the throats of martyrs resurrected as thugs of Central Security
Drifting through the realm of the Egypt Railway Company, how come I never caught it till it fled to my room?

Ruptured after I sleep my night in the office toilet I whisper to the tea boy: Without a Revolution, life is unbearable
Did you know Ibn Farid said the death of lovers is a happy life and murder is preferable to abandonment
The sad thing is that as there is no change without massacres so there is no time without waiting, are you familiar with angels?
Angels? the white-haired man sneers, rubbing a bald head like a boulder and staring pityingly, he lends me five pounds

A lion bearing a moleskin I seek out one of many lionesses (a lioness, where I come from, is another word for slut) to tell her that the Revolution is not in Tahrir Square
And savouring a frappé riding on the back of a smoothie after the third double espresso at a major outlet of Cafe Cilantro
I scream at an adolescent Catholic from behind the screen of my laptop: There is no such thing as penis envy!

From Dokky to Tahrir many times in the company of a young poet also from Tanta
the failure of our efforts confirmed when my lover, bereaved, does not answer the phone
and while Zizo dallied with that Jordanian girl the night my lover called to tell me, was her calamity the convent of our togetherness?
When she picks up at last I convince my poet friend there is a sit-in for real in my own room, we set out unarmed

and in Bermuda shorts he follows me on bare knees past the same bedside table, a snooper planted among the misled young
Throngs of protesters are gathered round Tahrir’s iconic Stone Cake now turned to an old shoe sole, exactly as we were
Matchbox tanks and F-16s like pins – insolent marauders – between the mattress boards and the sheets snipers by night

We copulate with the pillows after I tell my friend God is in the rail tracks: No revolution should have free wifi
I imagine my lover kneeling before me in her black blouse, our grief heavenly as I come in her throat
and when my mother wakes us in the morning I do not resist, I see the maid holding the Hoover with the republic’s Eagle on it
I see the republic’s flag itself fluttering above the heads of aliens and I know we will not defeat Israel
My friend furious with the sleep in his eyes while the Hoover trunk slips under the bed
When the mops and soap appear I have trouble keeping him off the maid: No point raping her now!
Only the sound of the Hoover while he sobs, no blood or iron, the parquet floor is empty and clean
and where the books of poetry used to be on the shelves are bottles of Dettol and Pledge, sponges and neat, trellissed towels
Suddenly my bed exhales to an armoured vehicle siren, the sheets catch fire and the mattress burns
The table morphs into a fearsome lion roaring and my friend has disappeared, the writing on the wall:

A PANTHER WHICH DURING SEX EJACULATES EVERY TWENTY MINUTES, ITS TONGUE COARSER THAN SANDPAPER

O mournful lover, giver of the terminal orgasm: Death has knotted our lives
I have seen the comers and the goers, kissed the Wahhabi beards and ran from the blade-wielding Remnants on the Metro steps
I have carried the Saint into the darkness of the grave simply to reassure your father, nodded off between two compartments of the Cairo-wending train
I have found you beneath my bed with the army of my mother in the room, I have surrendered my neck to the mouth of the lion.

Reworked by the author from the original Arabic