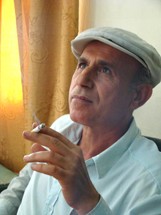 I ran roughshod over my heart and left the boy after a few bystanders and passers-by had gathered around. I left him to the mercy of the unknown and to the whim of fate. With every step that took me further from him, my contempt for myself grew, and when I stepped out of the tunnel I was an absolute wretch, in full flesh and blood.

Now I deserved to be slaughtered for the crime of leaving the boy alone in the Bab al-Sharqi tunnel. And here it was, my turn to be slaughtered after the third head, which had affixed its eyes upon me and exposed me. I saw it, and its eyes had begun to blink astonishingly fast, as if the head had just come to grips with the tragedy: that it was separated from its body and was no longer any use without it, just as the body without the head had become the mere dead meat of a dead person. It could not believe this sudden, accursed separation, nor did it believe the brutality of exile from the land of the body, as ever since it was a foetus in its mother’s womb it had been in harmonious concord and in unity with its body. Why then should it leave against its will, and foresake its family, its city, and the land of its body, to be severed and exiled forever, living dead and apart from itself? They had recklessly exiled it, with atrocious indifference.

I saw everything trembling like a palm branch – the walls, the trees, the water, the people, the blue sky and the earth were shaking under me. Everything was incapable of controlling itself and could not desist from trembling. This is what I felt without seeing it because the width of my left eye’s range was witnessing only what was below, while my neck had become stretched from my lethal wait for the fourth shout, and I could neither see the sky, nor the walls, trees, water or people. But, I discovered and recognized the secret of this trembling and shaking – it was me – I was the source of this earthquake. It was my trembling body – I was the earthquake.

These slaughterers had left me hanging between the hope of death from a bullet and the terror of being tortured and put to death painfully slowly so that when I died I would die a thousand and one deaths each minute. It was odd, why my slaughter was delayed, after my turn had come right after the third head, rolling and presenting itself before me like a mirror in which I was seeing what would be happening to me in a short while. The sun had set, and an ugly calm had descended, as if the work day had finished in a government office, and time had negated the place so that the office was now bare and desolate with no one remaining there. But the calm was quickly torn apart by dogs barking and birds chirping, which dispersed the savage desolation, which saw me crushed by the taste of the deadly wait, especially after I had now discovered a shameful wetness running between my thighs. Had I involuntarily and unconsciously wet myself or was it an ejaculation of semen, in the way I had heard that innocent victims ejaculate at the moment of their execution. From the smell it seemed to be urine, though I had not smelled urine when the three heads rolled. But then, how could I smell when everything in me had frozen –senses, thinking, consciousness and awareness – and I had entered the tunnel of nothingness?

I remembered an old proverb “darkness is a shield” or “the night is a shield”, quoted by the Arabs. Were they fearful of light and brightness because it exposes and lays things bare? With my hands tied behind my back, I began to feel what was behind me. It seemed to be a mud wall. And because my legs had gone numb from how long I had been sitting on them all these blood-filled hours, I dragged myself a little and then without making a sound fell back against the wall. I did not hear a sound or movement from anyone nearby. I took a breath, as if I had discovered I was capable of breathing for the first time, now that my legs, head and neck were relieved of sitting in a bowed position. But what was this growling and puffing in my face? I got goosebumps and my scalp went dry as animal hair brushed against my arm and hand; whatever it was sniffed my neck and my body and went away. It was a dog, or possibly a wolf, come during this night crowded with beasts of prey. My mother lifted me up from my fall and dusted off the chaff of bloodstained bullet shells, Pepsi Cola and Seven-Up cans, Nestlé sweet wrappers and cassette covers that covered me. She dusted off all the trash of the nightmare and ran, carrying me over her shoulder towards sleep.

I heard footsteps of someone approaching, then a man stood beside me. He removed the black rag from my eyes and pulled a bag down over my head, then checked that my hands and legs were tied firmly. He flung a stale loaf of bread into my lap and said: “We don’t know in which direction we should face to slaughter you . . . towards the Jews, or like the Sabians, or maybe it would be better if we slaughter you in the direction of Moscow?