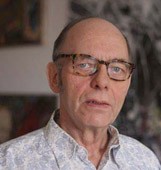 Pierre Joris
From inside out: The black suns of the interior

For a long time the only West I knew was the Wild West. Raised in a small country between France and Belgium and Germany, in that post-World War II era one could accurately describe as an American cultural quasi-protectorate, Indians and cowboys was my West. What I later learned to call the Maghreb was East or South. And yet there were intimations. One of my earliest haptic memories is a word, a name, I heard on the news my father was listening to on the mahagony Nordmende radio set with the large green eye. It was the name Krim Bel Kacem. I can still hear it in the singing French inflections of the news announcer coming back over and over: Krim Bel Kassem, Krim Bel Kassem. A few years later I found out the connection between the name and a historical reality: visiting Paris with my father, staying at the Hotel du BrÈsil near the Luxembourg gardens, I was woken in the middle of the night by several loud explosions and the rat-a-tat-tat of machine-gun fire. The next day I learned that this was an OAS plastiquage and the ensuing getaway. Through the sounds of the last reactionary spasms of the Algerian war of independence, the history of the Maghreb had entered my life.

By 1965 I was living in Paris, studying medicine in the rue des Saints PËres during the day and hanging out in St Michel, the new hip quarter, at night, reading voraciously in Shakespeare and Co, the English language bookshop on rue de la B°cherie, and beginning to write. That year I dropped out of medical school, having decided to devote myself completely to poetry. Cut off financially by my parents, I needed a place to live and asked George Whitman if I could stay in one of the upstairs rooms of the bookshop. No problem, George said, and that afternoon I moved my suitcase into the small upstairs room with the two mattresses. Evenings I worked selling the New York Times in Montpar-nasse, and when I came back late that night, I slipped into the room and onto my cot as silently as possible so as not to wake up the roommate who was already sleeping on the other mattress. I woke when my companion started moving about the room, swung my legs sideways, sat on the cot and greeted him, introducing myself. He looked up briefly from the book he had started to read, returned the greeting and introduced himself: Mohammed KhaÔr-Eddine.

What has remained with me from that moment on through all subsequent meetings with Mohammed KhaÔr-Eddine can be sum-med up in one word: intensity. A fierce intensity or an intense fierceness – it was often impossible to decide which it was. Here was someone totally gathered around, or rather, in a single point of focus, from inside out: a solar intensity radiating from somewhere deep inside, or better, gathering from everywhere inside (soul and skin, organs and bones, mind and blood) to radiate out through a gaze that concentrated the black sun of the interior, twin to the desert sun of his birth place. Black suns, may be more accurate, or as he put it in an early poem: “My black blood contains a thousand suns.”

I was in awe of him, who was five years older and had already published one small pamphlet, NausÈe noire, which had come out in 1964 as a special edition of the magazine siËcle ‡ mains in London. I treasure my copy of it, especially the stark black cover on which a little white lets through the title and the author’s name, and the small typewriter font that demands a near painful concentration of the reader’s gaze. (I have to add that years later the poet Claude Royet-Journoud, who had published the pamphlet, complained to me that Mohammed KhaÔr-Eddine had not given siËcle ‡ mains credit when the poem was reprinted in the volume Soleil arachnide. My guess is that Mohammed had no time for such niceties in his frenzied rush ahead.)

I saw him off and on during the next six months, sometimes at our home-cum-library, sometimes in local bars around St Michel. He was broke most of the time, despite the fact that, as I learned later, George Whitman would help him out financially on occasion while Jean-Paul Sartre gave him a small monthly allowance that never lasted more than a week or two. I was making a little money selling the Times, most of which went into bottles of cheap red wine, often shared with Mohammed. It was on those occasions that I first learned about Maghrebian literature, that the names of Kateb Yacine and Nedjma, of Abdellatif La‚bi and the magazine Souffles, and many others first came to my attention. A world I did not know of had begun to open up then and is still doing so, today.

KhaÔr-Eddine was not talkative, though wine would loosen him up for awhile and he could become expansive, only to just as quickly withdraw again, or, at times, turn querulous – he didn’t suffer fools gladly, and my ignorance must have made me look the fool all too often in those days. But what has remained core for me, more so than the literary and political information gathered from him, was the example his intensity set: he was the poet incarnate, a truly rimbaldian figure whose total dedication to his art awed me no end. I was still searching, unsure of myself, unsure that it was even possible for someone to become a poet in a language that was not the mother tongue, unsure if I could bear the absolute exile such a decision implied. KhaÔr-Eddine was living proof that it was possible and that total dedication to the chosen path was the only way to achieve this aim. Years later Allen Ginsberg mentioned in conversation that he often tried to think ‘through’ others, through their minds (he mentioned Kerouac of course, but also Robert Creeley and Robert Kelly, as well as others that don’t come to mind right now). I immediately thought how often I had tried in those early years to think ‘through’ Mo-hammed KhaÔr-Eddine’s mind – both in order to try and understand it and its path through poetry, and in order to gather from it the courage to continue the trek.

And the trek did continue: in 1967 I left Paris for New York and didn’t return for a longer stay for many years, except for quick one- or two-day forays on which I didn’t see KhaÔr-Eddine, though I would get news from him via his books which I would buy on those visits. By the late seventies I was living in Algeria and one spring day, I believe it was in ’79, waking up in a hotel in Tizi-Ouzou I went down for breakfast and over coffee and flicking lackadaisically through the pages of El Moujahid I was startled to come across an article relating KhaÔr-Eddine’s arrest in Morocco. He hadn’t been able to bear his exile any longer and had tried to go home, rejoin his beloved ‘Suddique’ though knowing full well that his 15-year long public rant against the king and the Moroccan government would get him into trouble. I truly feared for his life then, knowing the hardships La‚bi and many others had undergone during their years in jail. There was not much I could do, except write letters to the editor and sign petitions demanding his immediate release. Many of us did so, and there was enough pressure generated to set him free.
Some time later I was coming through Paris to do a reading with a number of American poets at the Centre AmÈricain on the Boulevard Raspail. After the readings we all went for dinner to the Coupole on the Boulevard Montparnasse. It was a grand and festive poets’ table, including Allen Ginsberg, William Burroughs, Kathy Acker, Gregory Corso as well as a number of French poets. We were in the middle of our repast when I looked up and saw someone come through the door. I recognized Mohammed KhaÔr-Eddine immediately, and was about to get up and go over and embrace him, but something held me back. He had changed since I last saw him, nearly fifteen years before: aged, of course, as we all had, but he looked haggard and haunted. What had not changed was the intensity, the fierceness. He walked in and made his way between the tables, clearly looking for someone but unable to find that person. When he came close to our table, his gaze finally locked with mine. I raised my arms and yelled over the din: “Mohammed, it’s me, Pierre! How are you?” He acknowledged the greeting with a quick nod of the head, came closer and said fiercely: “Give me a hundred francs!”

I noticed then that several waiters and a maÓtre d’hÙtel were closing in, had in fact kept a close watch on Mohammed’s progress through the restaurant – they obviously knew him and had their orders. Mohammed ignored them with total disdain and repeated his demand. “Sure, but why don’t you sit down and have a drink with us,” I said, motioning to a waiter to pull up a chair “pour mon ami”. The waiter glanced at the maÓtre d’h, who glanced at our motley table, shrugged his shoulders and nodded an okay to the waiter, who took a chair from an near-by empty table and started to bring it over. Mohammed turned and waved him away: “Non.” Then he turned back to me, reiterating his demand. I tried once more: “Mohammed, look, sit down, drink and have dinner with us – I would like you to meet Allen Ginsberg and William Burroughs and . . . He interrupted me: “Non, I have things to do. Donne-moi cent francs!” I realized that he was locked into something only he knew about, and that I would not be able to make him budge. I gave him the money, he nodded a thank you, we shook hands, he turned heel and disappeared into the night outside. I had an urge to get up and run after him, but didn’t, realizing that I could not join him where he was going. So I turned to my neighbor, Kathy Acker, and started to tell her everything I knew about Mohammed KhaÔr-Eddine, what an absolutely superb poet he was, the greatest of his generation in Morocco, how powerful his prose was, how violently he had disembowelled the colonizer’s language in order to be able to put it to accurate new uses, how he had turned it into a truly alive counter-language and how especially in Moi, l’Aigre he had done that with a brilliance that bordered on genius.

I sang Mohammed’s praises for as long as she and anyone else at the table would listen – I wanted them to know, but, maybe before all, I wanted to reassure myself, as I knew without knowing it, that this was the last time I would see him. And it was. Except that from time to time when I sit down to write a poem I try to think through him, Mohammed KhaÔr-Eddine, and try to gather that way some of the absolute intensity and fearlessness necessary for a true guÈrilla poÈtique.

When I heard of his death, the line of poetry that came to mind was not his, but this one, by Guillaume Apollinaire: soleil cou coupe / sun throat cut.