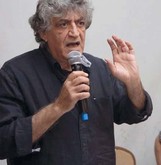 Shimon Ballas passed away a year ago. He was an author, intellectual, mentor, and political trailblazer. In the words of our mutual friend Shoshana Gabay, Shimon was “the spiritual father of the Mizrahi1 political Left”. I loved him like a father. Once, I even found the nerve to actually tell him that I wished he were my father. He gave me this bashful smile in response and that was it. I suspect I may have embarrassed him.

Shimon Ballas was born in 1930 in Baghdad’s Christian neighbourhood of Bataween. In his autobiography First Person Singular (2009), he recalled his teenage years as a time of discovery of, and love for, the Arabic language and particularly Arabic literature. He was spellbound by the works of Gibran Khalil Gibran and Taha Hussein whose words he would savour day and night as a teen. Ballas admitted that he became a member of the Communist Party in Iraq after reading Jack London’s The Iron Heel. In 1948, he joined the party’s anti-imperialist campaign against the Portsmouth Treaty between Iraq and United Kingdom.

Ballas arrived in Israel from Baghdad in 1951 and ended up in a temporary migrant camp (ma’abara in Hebrew) on the outskirts of al-Majdal – a Palestinian city, which had recently been purged of all its indigenous population. Aya, one of Ballas’s most moving novels, is about his Muslim nanny, the titular character, and the author’s heartrending separation from her; a symbol of being torn away from his motherland. The transition to Israel was far from easy and in his own words, “Sitting in the migrant camp was a descent into a new world; a world where one is stripped of all privacy, [and] where one’s every move, whether inside or outside one’s own tent, is scrutinized under the gaze of others.” Ballas wasted no time joining the local Communist Party whilst still in the migrant camp and began delivering both their Arabic and Romanian newspapers to locals in the area. He then took up writing in Arabic for the party’s daily paper, Al-Ittihad. He also began publishing an assortment of Arabic short stories in Al-Ittihad’s literary supplement, Al-Jadid under the pen name, Adib al-Qass. Beyond his ideological commitment to social realism (à la Lukács) and critical Marxism, Ballas demonstrated a fierce commitment to his readers, i.e. the local Palestinians. He would later become the first to compile and translate a collection of Palestinian stories (1970), at a time when no one in Israel so much as recognized the existence of a Palestinian people, let alone a national Palestinian literature.

Ballas never abandoned or stifled his native Arabic tongue. He was one of a handful of Iraqi Jews who taught Arabic literature at university, raising generations of Palestinian students’ socio-political awareness in the aftermath of the 1948 Nakba that saw the total and utter annihilation of the Palestinian elite. Many Palestinians have recounted to me in awe, tales and anecdotes galore of Ballas’s beautiful Arabic and his tireless devotion to them. His commitment to Arabic and to Arab culture echoes through his literary body of work, as he would reiterate time and time again, “I never deny my Arab origins or the Arabic language.” On one occasion, he recalled how surprised he was to realize the extent of the Jewish Communist Party leaders’ (most of whom were Ashkenazi2 Jews) ignorance about the Arab world, not to mention their Arabic linguistic illiteracy. In this vein, he was also the first to dub himself an ‘Arab Jew’, with several of his contemporaries such as Sami Michael and Sasson Somekh soon following suit, not to mention the younger generations, myself included, who saw something of themselves and their values in the socio-political trail he had blazed for himself.

Ballas is considered the spiritual forefather of the Mizrahi Left for a number of reasons: for one, he was the first author to have ever given Mizrahi Jews representation in literature; as a critical thinker, he habitually wrote and called for justice and equality; and what is more, Ballas boldly exposed the deep-seated colonial dynamics at play in Israeli society. His contributions however, to the formation and empowering of a Mizrahi leftist identity do not stop there. Ultimately, Shimon refused to buy into the Zionist metanarrative that branded Israel ‘The Promised Land’. In an interview with Ammiel Alcalay in 1994, he summed up his immigration experience from Baghdad to Tel Aviv as follows, “I came from an Arab environment, and I remain in constant colloquy with an Arab environment,” adding that “I also never changed my environment. I simply moved from one place to another within it. The whole project of a nationalist conception, of Zionist ideology, of the Jewish point of view, the bonds between Jews in the diaspora and Israel, all of that is rather trivial for me and does not play a major role [in my life]; it’s not part of my cultural world.”

In 1964, without any warning, Ballas published his debut Hebrew novel, The Ma’abara (temporary immigrant camp), which later became a classic and a baseline of sorts for generations of readers, teachers, and students alike. This novel was preceded by an Arabic version entitled The Diary of a Maid, two excerpts of which appeared as self-contained stories in Al-Jadid. However, the manuscript ended up collecting dust in a drawer for ages, seeing as the Communist Party at the time did not print any novels. Consequently, Ballas decided to adapt the book into a Hebrew novel.

The anguish of having to part with Arabic as his language of literary expression was very trying indeed. Ballas spent roughly two years writing the Hebrew version of the novel, after fully immersing himself in both the Bible and the Mishnah, whilst also abstaining from any and all Arabic reading or radio content. However, the Arabic language, from which he had to disengage for the longest time, followed and haunted him nonetheless. “One night,” he recalled, “when I came home late from the printing press, I picked up Taha Hussein’s The Days before going to bed to check up on something. But after I had turned off the lights, I was struck by a huge surge of words, sentences, and verses in Arabic that suddenly came bursting forth [and] which vanquished sleep from my eyes until morning light. It was the Arabic language exacting revenge. It was the punishment I likely deserved for having turned my back on my beloved mother tongue.”

At any rate, The Ma’abara became the first time that the Mizrahi narrative had found its place in Hebrew literature and for that, Ballas would pay a hefty price. Hebrew authors and literary critics who failed to understand the complexity of his work gave him the woefully reductive label ‘ethnic writer’.

Despite writing in Hebrew, Ballas considered himself for all intents and purposes, an Arab writer in exile. He kept in regular contact with a range of political exiles, be it in Paris or London, whose stories and selves he would sketch out and later represent in fiction. In his literary work, he gave voice to his generation of postcolonial Arabs in exile, writing about diaspora life with tremendous empathy. In his now-classic novel, Outcast, which came out in 1991, during the First Gulf War, Ballas set out to portray the hypothetical reality of an Iraqi Jew named Ahmad Nissim Sosa who had converted to Islam and remained in Iraq after the great exodus of the country’s Jews. Although not an autobiography per se, the novel nonetheless contained distinct autobiographical elements which Ballas used to delineate an imagined reality – or what Yuval Evri dubbed as “the Iraqi option”, which ultimately was rendered wholly untenable for Ballas or his contemporaries. This scenario, which Ballas explores in the novel, plays a pivotal role in challenging the historiographical narrative whereby Arab Jews were facing the threat of genocide, and their immigration was in fact a rescue mission. He argued that, in many ways, what we find in history books is in fact an extension, if not a projection, of the discourse around European Jews (and the narrative of extermination) onto Jews of Arab descent. The novel spells out the hesitations, misgivings and contradictions, but primarily the dominant, nonlinear processes at play in the Iraqi national sphere. Outcast offers a prospect of migration between national discourses (be they Zionist or pan-Arab) that are then hybridized to a far greater extent than is readily acknowledged.

Ballas’s novel The Last Winter focuses on a Paris-based group of revolutionary Marxist exiles. At the heart of the novel is Henri Curiel, an Egyptian Jew who had immigrated to Paris. Also popping up in the novel are a host of other real-life figures such as the Iraqi poet, Abdul Kader El-Janabi, and the Tunisian author Al-Afif al-Akhdar. In Signs of Autumn, Ballas focuses on the character of Egyptian writer Husain Fawzi and the identity crisis gripping him in the autumn of his life. His novel Solo concerns the father of Egyptian satirical theatre Yaqub Sanu (James Sanua, aka Abu Naddara) – a Jewish journalist and Egyptian nationalist who was also very much a staunch critic of Egypt’s then-Khedive, Isma‘il Pasha’s collaboration with the British, which ultimately led to his expulsion to Paris.

Shimon was my mentor in Arabic. When I decided I was finally going to reclaim my mother tongue after it had been systematically erased throughout my studies in Zionist schools, Shimon gave me my first book in Arabic; Ghassan Kanafani’s Returning to Haifa. For that reason, my excitement knew no bounds when I picked up Elias Khoury’s latest novel, Stella Maris and lo – there was Shimon! Hasqil Qassab was a teaching assistant at Haifa University and though not a mirror representation of Ballas, the parallels between the two were uncanny. Qassab is the one who convinces Adam, the Palestinian novel’s protagonist to reclaim and re-embrace the Arabic language and its literature. How very sad indeed that Shimon never got to read this novel, originally in Arabic and translated into Hebrew by myself, his own disciple.

About fifteen years ago, I translated a collection of stories by Lebanese author, Mikhail Naimy. When Shimon caught wind of this, he gifted me both volumes of Naimy’s autobiography, Sab‘un (‘seventy’) that had been sitting on his bookshelf at home. Shimon was about seventy-five at the time. He then told me in that precious moment, “When I bought these books, I was about forty years old and said to myself, Seventy? That’s still a long way off,” whilst in my own heart, I was thinking, “Seventy?! That is a really long way off.” And what do you know? Here I am now, on the cusp of seventy myself, and will soon be passing on this intergenerational gift to my younger friends who have either completed or are still making their way on their magical journey en route to Arabic.

Goodbye, our beloved Shimon. What a difference you have made in this world.

Back to Banipal 69 contents webpage