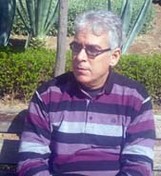 Saad Sarhan is a Moroccan poet. Born in Fez, his poems have been published in a number of Moroccan and Arab literary magazines. He has published five collections of poetry since 1994. Some of his poems have appeared in anthologies in Spanish, French, German and English. Together with Yassin Adnan he published [Marrakech: Open Secrets], a book in Arabic and French, in 2008, published in English in Banipal 48 – Narrating Marrakech. Sarhan has worked as a professor of mathematics since the 1980s.