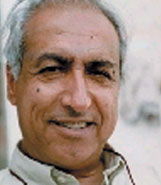 was born in Iraq in 1946. He graduated in Law from Baghdad University. He is a well-known short story writer and has published eight collections, the first [20 Very Short Stories] in Baghdad in 1976. With the publication of his second, Zuhoor fi Yad al-Mumya’ [Flowers in the Hands of the Mummy], in 1981, he became highly regarded by critics. He has two novels, one a trilogy entitled The Child of CNN. He left Iraq in 1979 and lives in Sweden.