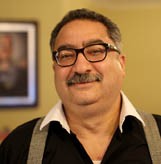 Ibrahim Issa is an Egyptian journalist, born in 1965. He began working on Rose El-Youssef magazine when still in his first year of studies at the College of Media, Cairo. He was editor of the Al-Dostour daily newspaper 1995-1998 and from 2004 until October 2010, when he was sacked by the paper’s owner Sayyed Al-Bedawi.

Ibrahim Issa has been among the most active of Egyptian journalists in protesting against political practices in Egypt. As a result the authorities closed down three newspapers he edited and confiscated his novel Assassination of the Big Man.

He has been awarded several prizes, including the 2008 Gebran Tueni Award, the 2010 International Journalist of the Year Award from the UK’s Society of Editors, and the 2011 Index on Censorship Freedom of Expression Award. His novels include: Hussein’s Blood (1992), The Last Manifestation of Mary (1993), Blood on a Breast (1996), Assassination of the Big Man (1999), National Ghosts (2008), and Our Master (2012), which is shortlisted for the International Prize for Arabic Fiction.

He continues to edit the electronic publication The Original Dostor, which is separate from the newspaper, and since July 2011 has been editor of Al-Tahrir newspaper.