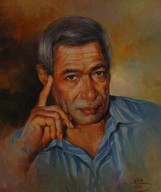 is an Iraqi poet and novelist, born in Missan, Iraq, in 1942. He has published nine poetry collections and two novels and has also translated several anthologies of Russian poetry into Arabic, including works by Sergei Yesenin, Anna Akhmatova, Mayakovsky, Alexander Blok, and Pushkin. He was a member of the Iraq Writers Union’s Board. He won the Soviet Peace Award in 1983 and the Owais Award for Poetry in 2003.

On 11 April 2022, Banipal received the sad news that Hassab al-Sheikh Ja'far had passed away. In tribute to him and his works, as a highly regarded Iraqi poet, novelist and translator of Russian poetry into Arabic we have published as a news item, along with an extended biography, the selected poems that we published in Banipal 46 – 80 New Poems (Spring 2013),  translated by Camilo Gómez-Rivas. Click here to read it.