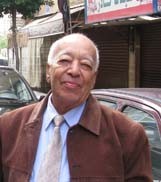 Mohammad Khashan was born in Suhmata, Palestine, in 1934. In 1948, he became a refugee in Lebanon together with his family and over 200,000 other Palestinians who were forced out of Palestine by the newly formed state of Israel. He studied Arabic Literature and Education at the Arab University of Beirut and taught at United Nations (UNRWA) schools for 32 years.

In 2007 he started writing his memoirs which were serialized on various Arab literary websites like Kikah.com and in newspapers, including Al-Hayat. Presently, he is working on a book of essays about aspects of life in Palestine before 1948, including traditions, flora and fauna, proverbs, idioms, words and dialects that are unique to Palestine and especially to the Upper Galilee region of Northern Palestine.

He is also working on a book of poems dedicated to the memory of his late wife who lost her life in the 2006 Israeli invasion of Lebanon.