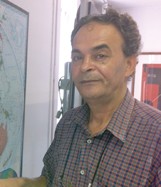 Basem el-Nabres was born in 1960 in Khan Yunis Camp in the Gaza Strip. He could not complete his secondary education and has done numerous jobs in his early life, even working as a domestic for Ariel Sharon, the former Israeli Prime Minister.

In 1990 he published his first collection of poetry in Jerusalem. He has published seven collections of poetry and a book about last Gaza War entitled Yawmiyyat al-Harb ‘ala Gaza (Diary of the War against Gaza), which was written during the war itself and then published in Tunisia by Dar al-Tawbad.

Due to his articles against corruption and religious dictatorship his house was attacked and now he currently lives in Barcelona hosted by PEN international.