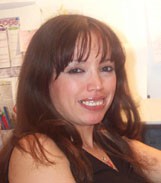 is a Moroccan writer and translator who currently lives in the south of France. She has a diploma in the History of Philosophy and a degree in Philosophy. Her first collection of short stories, White Birds, was published in 1997 by Dar al-Boukili in Morocco. Her second collection, A Current of Air, was published in 2003 by Dar al-Sada, Dubai, and won the Arab Creativity Award. Several of her works have been translated into French, German and Tamazight. She also writes articles for newspapers and websites. Her novel, The Waist and the Homeland, has yet to be published.