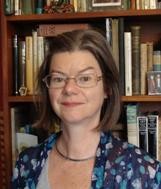 Rachel McNicholl, MA, is a freelance editor and translator (from German and occasionally Italian) based in Dublin, Ireland. She studied modern languages in Ireland, Switzerland and Germany and worked as a teacher, translator, journalist and editor in Hamburg, Germany, before moving back to Ireland. Authors translated by her include Lydia Mischkulnig, Yoko Tawada, Sigrid Weigel and many German-language journalists whose work featured in the German Newspaper News Service produced by the German Press Agency (dpa) in the 1990s.