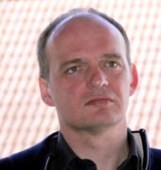 Thomas Lehr, born in 1957 in Speyer, lives in Berlin. He studied biochemistry at the Freie Universität Berlin and worked as a programmer and IT specialist in a scientific library. He has been awarded many prizes for his work. His most recent titles include Nabokovs Katze (novel, 1999), Frühling (novella, 2001), and the novel '42', which was shortlisted for the 2005 German Book Prize. 'September, Fata Morgana' was shortlisted for the 2010 German Book Prize and gained him the Berlin Book Prize 2011.