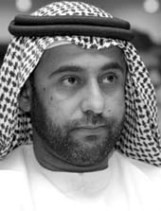 Ibrahim Mohammad Ibrahim started writing poetry at an early age and has been publishing his poems in newspapers and magazines since 1980. He was born in Dubai in 1961 and has a BA in Arabic Language from the Beirut Arab University. He has worked in a number of cultural organisations including the Emirates Writers’ Union, the Arab Cultural Club and the Arab Writers’ Association. He has five poetry collections published, and in 2009 he was awarded the prize for poetry of the Emirates Appreciation Award for Science, Art and Literature.