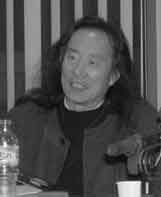 was born in Switzerland in 1955, and grew up in Beijing. He began writing when he was sent to the countryside in the 1970s. On his return to Beijing he became one of the founders of the 'Misty' school of contemporary Chinese poetry. Among other things, Yang Lian is known for his poem sequences and long poems which display a profound understanding of, and creative links with, Classical Chinese poetry.

His poems became well-known and influential inside and outside of China in the 1980s, especially when his sequence ‘Norilang’ was criticized by the Chinese government during the ‘Anti-Spiritual Pollution’ movement.

Yang Lian was invited to visit Australia and New Zealand in 1988 and became a poet in exile after the Tiananmen massacre. Since that time, he has continued to write and speak out as a highly individual voice in world literature, politics and culture.

His work has also been translated into more than twenty languages, including English, German, French, Italian, Spanish, Japanese and Eastern European languages.

Go to www.yanglian.net for more

On his website, Yang Lian records a momentous conversation with Adonis, when they first met at an International Poetry Festival in Jordan in 2003. Click here for more.

Yang Lian is a Board Member of International PEN, and a member of the Independent Chinese PEN. He is a Professor of Poetry at the European Graduate School in Saas-Fee, Switzerland, and in 2006

was a Jury Member of the Lettre Ulysses Award for the Art of Reportage.