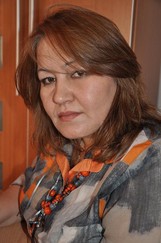 Razan Naim Moghrabi is a short story writer and novelist from Libya. She graduated in accountancy, and since 2000 has published nine works, including short story collections In Exile and Horses Devour the Sea (2002), Texts with a Lost Signature (2006), An In-between Man (2010) and Souls for Sale (2010), and two novels, Migration to the Tropic of Capricorn (2004) and Women of the Wind (2010), longlisted for the 2011 IPAF.