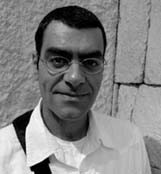 Hayan Charara was born in Detroit, Michigan, in 1972, to Lebanese immigrants, and is the author of two poetry books, The Alchemist's Diary (Hanging Loose, 2001), named a "Notable Debut" by Publishers Weekly, and The Sadness of Others (Carnegie Mellon, 2006), which was nominated for the National Book Award.

A recipient of a fellowship from the National Endowment for the Arts, his poems have appeared in numerous publications, including Callaloo, Hayden's Ferry Review, Literary Imagination, The Massachusetts Review, Michigan Quarterly Review, and such anthologies as American Poetry: The Next Generation, Present/Tense: Poets in the World, and the Norton anthology Language for a New Century: Contemporary Poetry from Asia, the Middle East, and Beyond. His poems have been nominated for the Pushcart Prize and he was recently awarded the Lucille Joy Prize in Poetry.

He is also the editor Inclined to Speak: An Anthology of Contemporary Arab American Poetry (University of Arkansas, 2008). A children's book he wrote, The Three Lucys, about a child's experience during the July War in 2006 between Israel and Hezbollah, won the New Voices Award Honor from Lee & Low Books. He has degrees from Wayne State University, New York University, and a PhD in literature and creative writing from the University of Houston. He is also a woodworker.