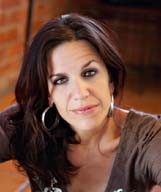 Laila Halaby was born in Lebanon to a Jordanian father and American mother. Both her novels, West of the Jordan (recipient of a PEN Beyond Margins Award) and Once in a Promised Land (a Barnes and Noble Discover Great New Authors selection; also included in the Washington Post’s top 100 works of fiction for 2007) were published by Beacon Press.

She was the recipient of a Fulbright Scholarship for study of folklore in Jordan, which led to (a yet unpublished) collection entitled Tracks in the Sand. She also writes poetry (my name on his tongue, Syracuse University Press, to be published 2011) and children’s fiction. She is currently working on a novel entitled Woman, Be My Country, which is excerpted in Banipal 38 – Arab American Authors. She lives with her family in Tucson, Arizona.