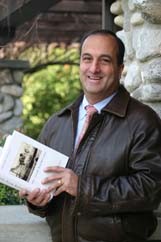 Gregory Orfalea has taught writing at the Claremont Colleges and he currently teaches Arab American Literature at Georgetown University in Washington DC. Richard Rodriguez called Orfalea’s 2009 memoir Angeleno Days, "delightful and wise". The author of two acclaimed histories, The Arab Americans: A History and Messengers of the Lost Battalion, his first collection of short stories is soon to be released as The Man Who Guarded the Bomb. He is now at work on a study of the founding of California by Junipero Serra. Orfalea divides his time between Washington, D.C., and Los Angeles.