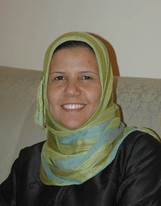 was born in . She has a PhD in architecture from (2008). She has published five collections of stories and three novels, with selections translated into English, French and German. Her novel Hubb Laisa Illa was translated into Italian. She has won the Suad Al-Sabah Prize of Kuwait for a collection of short stories in 2000, and the President of the Yemen Republic award for young writers in 2001. She is a member of many groups and in particular a committee campaigning for an end to violence against women.
More on her website http://www.zafrah.net/