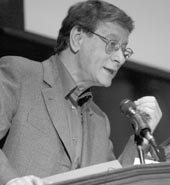 Mahmoud Darwish, the great Palestinian poet, passed away on Saturday 9 August 2008, following complications after major heart surgery in Houston, Texas. He was just 67. He never stopped writing and performing his poetry, which has inspired thousands upon thousands of people of all ages and nationalities, and will surely continue to inspire them. He is one of the most renowned, respected and loved poets of today's world, a poetic giant who became the voice of Palestine, of Palestinian loss and exile, and in later years its voice of conscience.

It is very difficult to write the words that he is no more, this beautiful human being who gave of his craft, his imagination, his lyricism, his understanding, his tolerance and his courage to all who listened to him.

Mahmoud Darwish commanded audiences of thousands, thirsty for the sounds he uttered, wherever he went in the Arab world. Just last month he gave a massively attended reading in Haifa, back there for the first time since the early 1970s, and later another packed performance in Ramallah to mark the 60th anniversary of the Palestinian Nakba. Myself, I have vivid memories of listening to him in Friends Meeting House, London, in 1982. It was an electric and highly emotive atmosphere with the audience packed to the walls – the only reading that I am aware he ever made in London.

Mahmoud Darwish was born in 1941 in al-Barweh, Palestine, and had to flee with his family in 1948, only returning later. He grew up under Israeli occupation to become the world’s best-known Palestinian poet. He published his first collection of poetry in 1960. Jailed several times, he left to go to Moscow in 1971, afterwards living in Cairo, Beirut, Tunis and Paris, before settling in Ramallah in the early 1990s. He published over 30 collections of poetry and of prose, with some of these works being translated into 35 languages. In 1981, he started the literary quarterly Al-Karmel, which he later edited from Ramallah.

In 1995, his book Memory for Forgetfulness (trans. Ibrahim Muhawi) was published in English. A French anthology of his work Poesie: La Terre nous est étroite was published in March 2000 by Gallimard. Several collections of his work in English translation have been published, notably Why Did You Leave the Horse Alone?, Archpelago Books, 2006, Unfortunately, It Was Paradise (California University Press, 2003), and The Adam of Two Edens (Syracuse University Press & Jusoor, 2000, reviewed in Banipal No 12, Autumn 2001). In 2001 he received the Lannan Foundation’s Award for Cultural Freedom and in 2004 the Prince Claus Fund Award.

The latest translation of his poetry is the bilingual volume The Butterfly’s Burden, translated by Palestinian American doctor Fady Joudah, which brings together three of Mahmoud Darwish’s collections. On 29 September 2008 Fady Joudah will be awarded the 2008 Saif Ghobash – Banipal Prize for Arabic Literary Translation for this work, by unanimous decision of the judges. In the press release, the judges remark on “the translator’s sensitivity to the nuances and music of the original texts”.

Mahmoud Darwish was thrilled to learn that Fady Joudah’s translation has won the prize. But today it seems inexplicable that his life has come to such a sudden and tragic end and that the Palestinian people are starting three days of national mourning declared by President Mahmoud Abbas, who said: "Words cannot describe the depth of sadness in our hearts."

Margaret Obank writes: My fellow editors at Banipal join me in this tribute and in mourning Mahmoud Darwish's tragic passing.

Roger Allen writes: With the passing of Mahmoud Darwish, the Palestinian people has lost its most beloved poet, and the entire Arabic-speaking world must bid farewell to one of its mightiest literary figures. For well over fifty years, Darwish's poetry has served as a perfect mirror of the moods and aspirations of the Palestinians: defiant and confrontational in the earlier stages, more lyrical but still incredibly powerful in more recent times. I have encountered him and his poetry over many decades: through personal reading, in the intimate surroundings of prvivate gatherings, at academic meetings, and as one of 24,000 people who had come to hear him in a soccer stadium. Whatever the context, his magical presence as he recited his poetry never failed to work its wonders.

A great icon of modern Arabic poetry has now left us ... Rahima-hu Allah – may God have mercy on him.

To read the obituary by Peter Clark in The Guardian, 11 August 2008, with a personal memory by Margaret Obank click here

To read the interview with Mahmoud Darwish after his second major heart surgery in 1998, published in the feature on him and his work in Banipal 4, click here

To read Without Exile, Who am I? a poem of Mahmoud Darwish published in Banipal 4, translated by Anton Shammas, click here

To read an excerpt from Mural, a poem of Mahmoud Darwish published in Banipal 15/16, translated by Sargon Boulus, click here

To read Mahmoud Darwish's poem Not Like a Foreign Tourist Would, translated by Sinan Antoon and published in Banipal 23, Summer 2005, click here

To go to the English section of www.MahmoudDarwish.com click here

To go to the home page of www.mahmouddarwish.com, click here

To read and listen to Mahmoud's poetry and an interview with his translators Fady Joudah and Sinan Antoon on Democracy Now! (New York), click here

Mahmoud Darwish was given a state funeral in Ramallah on Wednesday 13 August. To read the reports and statements by his family on his death, click here