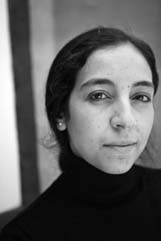 (b. 1970) is a Belgian author of Moroccan origin. She works as a lawyer for the Centre for Equality of Opportunity and Opposition to Racism in Brussels. In 2006 her story ‘Mercedes 207' won a literary prize. Next, Rachida Lamrabet's first novel, Vrouwland [Woman Country], 2007, was published to critical acclaim. Her latest short story collection is Een kind van god [A Child of God], 2008.