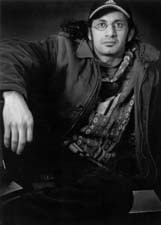 was born in Iraq around 1970; his exact date of birth is unknown. He studied as an electrical engineer and fled the country in 1992 to escape his draft orders. He arrived in The Netherlands in 1998 and instigated proceedings to become a legal citizen. After many years, his request was finally denied. In the meantime he had published a large number of books: novels, poetry and columns in newspapers. He won the El Hizjra Literature prize 2002 and the Phoenix Essay prize 2002, and was shortlisted for the J.C. Bloemprijs 2004 and the Debut prize 2004. His poetry collection De herfst van Zorro [Zorro’s Autumn], 2006, was shortlisted for the VSB Prize, poetry’s most prestigious annual award. His latest publications are the novel Dorstige rivier [Thirsty River], 2008 and De laatste slaaf. Biografie van een terugkeer [The Last Slave. Biography of a Return], 2009. He now lives in Belgium, where he is recognised both as a citizen and a writer and has been awarded a grant to work on new books.