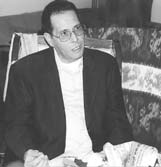 Yusuf Abu Rayya was born in Hihya in the Nile Delta. He published six short story collections, five novels, and seven books for children. He was on the governing board of the Egyptian branch of PEN International.

He was awarded the Naguib Mahfouz Medal for Literature for in 2005 for his novel Wedding Night, whose English edition by AUC Press was reviewed in Banipal 34 –  The World of Arabic Fiction.