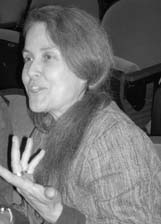 was born in St. Louis, Missouri, in 1952 to a Palestinian father and an American mother. She grew up in Ramallah, Jerusalem and San Antonio, Texas, where she graduated with a BA in English and world religions.

She has published many collections of poems, including her latest Tender Spot (Copper Canyon Press & Bloodaxe, 2007, to read the review in Banipal 32 click here). Also, You and Yours (BOA Editions, 2005), which received the Isabella Gardner Poetry Award, 19 Varieties of Gazelle: Poems of the Middle East (2002), a collection of new and selected poems about the Middle East, Fuel (1998), Red Suitcase (1994), and Hugging the Jukebox (1982).

She has received many awards and fellowships for her poetry, including the 1988 Academy of American Poets' Lavan Award, selected by W. S. Merwin.