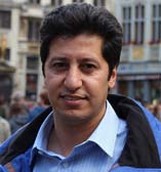 Taha Adnan was born 2 August 1970 in Assfi, Morocco. He grew up in Marrakesh and since 1996 lives in Brussels, working in the Ministry for Francophone Education.

He has published three collections of poetry in Arabic and one in French entitled Transparences (L’Arbre à Paroles, Belgium, 2006). He organizes an annual Arabic literary festival, Al-Salon al-Adabi in Brussels.

grew up in Marrakech and moved to Brussels in 1996. He runs the Brussels Arabic Literary Salon and co-ordinates Arabic Love Poetry in Belgium. His poems have been translated into French and Spanish. He won second prize at the 2011 International Arab Festival of Monodrama in the United Arab Emirates.