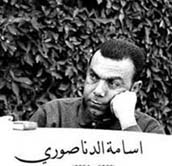 Osama Dinassouri was born in 1960 in a small village in Kafr el Shaikh, Egypt. He moved to Alexandria where he obtained his BA in marine biology. He published four collections of poetry: Harashif al-Gahm (1991), Mithl Zi'bin A'maa (1996), 'Ala Hay'it Wahid Shabahy (2001) and 'Aynun Sariha wa 'Aynun Mundahisha (2003). He lived in Cairo from 1992 until his death on January 4, 2007, after several years of struggling with kidney failure.

His last work, My Decrepit Dog, My Darling Dog (published posthumously in 2007) is an account of the impact of his illness on his life, his writing and his relationships with others. It is excerpted in Banipal 31.