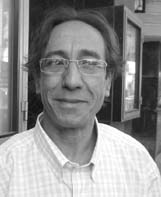 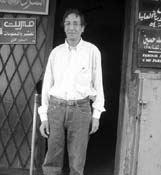 Egyptian writer and publisher Mohammed Hashem, who established his independent publishing house Dar Merit in Cairo in 1998, has been awarded the 2006 Jeri Laber International Freedom to Publish Award by the Association of American Publishers’ International Freedom to Publish (IFTP) Committee. It will be presented at the PEN American Center gala on April 18, 2006, at the American Museum of Natural History in New York City.

Since its beginnings in 1998, Merit has played a massive role in transforming the contemporary literary scene in Egypt, primarily because, as the announcement of the award states, Merit “supports and encourages new writers, publishing many of them for the first time”. Many of the young authors in Banipal’s features on “New Writing in Egypt” in Banipals 25 and 26 are published by Merit.

Hashem himself is a modest, unassuming and utterly sincere person, and has great rapport with his authors, as we discovered when we went to visit him in his office in February 2006, climbing the stairs of the old peeling building on Qasr el-Nil Street and entering two small smoke-filled offices, packed with books on every wall to the ceilings, and almost equally crowded with authors and friends.

Quietly and methodically, he has been working away, publishing author after author in attractive paperback volumes at affordable prices.

Born in Tanta in the northern Nile Delta region in 1958, Hashem worked first as a journalist, and is the author of a collection of short stories and a novel, Mala’eb Maftouha [Open Playgrounds], published in 2004.

The Award recognizes a book publisher outside the USA who has demonstrated courage and fortitude in the face of political persecution and restrictions on freedom of expression.