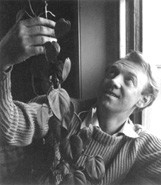 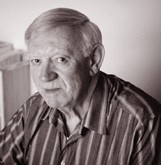 Banipal celebrates and commemorates James Kirkup, the poet, novelist, dramatist, translator, reviewer and obituary writer, who has died at the age of 91. James has a special place in our hearts as he was a regular and enthusiastic translator of works by Arab poets writing in French and a conscientious reviewer of French literature. He had a vast, seemingly untapped knowledge of poets, writers from all over the world, and read the literary press voraciously in both French and English, often sending us cuttings of authors we should publish. Born in South Shields on Tyneside, James made his home in the tiny principality of Andorra after living for many years in Japan.

For James’s 88th birthday, South Shields Library arranged “Kirkup – Child of the Tyne”, a special evening of readings and displays of artefacts belonging to James, along with the numerous editions of his works, plus sales. Long-standing publishers were present, such as Hub Editions, ourselves at Banipal, and Brian and Anne Brindin, of the online poetry in translation library, www.brindin.com. Just before his 90th birthday, the Library and Museum established The Kirkup Collection, and then the website www.jameskirkup.com. In 2003 Hub Editions published his Shields Sketches, writings set around a collection of sixteen line drawings of local scenes by George McVay originally published in the local Shields Gazette. From the Land of And we received a signed copy, in which he wished us good luck, and asked us if we had more translations for him to do.
James Kirkup studied Modern Languages, graduating from the college that became Durham University and co-producing the poetry magazines Dint and Fulcrum (also publishing in them some of his early poems).

During the Second World War he registered as a conscientious objector, and spent his time as a lumberjack and farm worker in Northumberland, where he heard the news that the atomic bomb had been dropped on Hiroshima. His hatred of and opposition to war continued all his life. In 1959, James Kirkup went to live in Japan, teaching English literature at the University of Tohoku, and of course he visited Hiroshima and Nagasaki as soon as he could. His poetry collection No More Hiroshimas, first published in 1960, was republished by Spokesman Books and the Bertrand Russell Peace Foundation in 2004 for the fiftieth anniversary of the devastation.

His passion for poetry and writing began when he was at school and it never abated. In the early years, wherever he lived, he sent his work to magazines and publishers, collecting armfuls of rejection slips before attracting the attention of the literary editor of The Listener and the publisher John Middleton Murray, and beginning to forge his literary path. He became the first Gregory Fellow in Poetry at Leeds University, and by the time he went to teach in Japan, three years after leaving England in 1956, he had published six collections of poetry, two plays, many translations of French poetry and two volumes of his six-volume autobiography, the first of which, The Only Child: an Autobiography of Infancy covering his life from age six to eighteen, drew hugely appreciative reviews in the Times Literary Supplement, The Sunday Times, the Yorkshire Post and others.

In 1977, however, he achieved very unwelcome notoriety after his poem “The Love that Dares to Speak its Name” was published in Gay News and its publisher tried at the Old Bailey for blasphemy – fortunately the last prosecution of its kind.
As well as a prolific writer who was internationally known, he was also an inveterate traveller, teaching English literature in colleges and universities in many countries including Sweden, France, Spain, Malaysia, the USA and Japan. Over his lifetime he received many awards and in 1964 was made a Fellow of the Royal Society of Literature. In 1996 he was awarded the annual Scott Moncrieff Prize, for his translation of Jean-Baptiste Piel’s Painted Shadows. Among his other notable translations are Simone de Beauvoir’s Memoirs of a Dutiful Daughter (1958) and Camara Laye’s The Dark Child (1955). James also became renowned for his obituaries, writing “some 300 obituaries” for the Independent newspaper – he also published a collection of poems entitled The Patient Obituarist.

The tribute above, by Banipal's editor Margaret Obank, was published in Banipal 35 – Writing in Dutch.


James Kirkup's many collections of poems include: No More Hiroshimas (Spokesman Books), A Correct Compassion, The Descent into the Cave, The Prodigal Son, Refusal to Conform, The Body Servant. His later works were original haiku and tanka as well as translations of these traditional Japanese poetic forms.

His complete works are published by the University of Salzburg Press, with some virtual books available on www.brindinpress.com. In Tokyo, 2002, his translations of Fumiko Miura, Pages from the Seasons, was published, and with Makoto Tamaki, poems of Fumi Saito In Thickets of Memory. Until his death, James Kirkup was a regular contributor to Banipal as a translator from French and a reviewer.