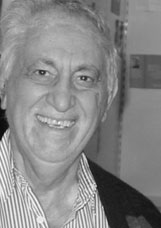 was born in Baghdad, Iraq, in 1929, the grandson of Khadija. He studied English at Baghdad University and became an English teacher at different high schools (1954-62). In 1962 he went to Heidelberg University to study English language and literature and Eastern languages. From 1972 to 1983 he taught English and Persian languages at Constantine University, Algeria, and Benghazi University, Libya. He lives in Germany.