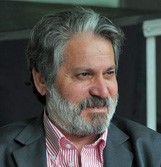 Subhi Hadidi is a Syrian critic, political commentator, and translator. He graduated from Damascus University and continued higher studies in France and the UK. He writes extensively on contemporary Arab poetry.

His recent publications in Arabic include "Exiles's Crossings: Mahmoud Darwish and the Lyric-Epic Form", "The Novel and the Archive: How History Is Better Narrated?", "Before the Last Post in Postmodernism", "Frantz Fanon and the Postcolonial: Can the Subaltern Speak?". He published Reading Raymond Williams, After Reading Edward Said in English, and Palestine: L'enjeu culturel, and Entretien avec Edward Said in French.

Subhi Hadidi lives and works in Paris and is also a regular contributor to Al-Quds Al-Arabi daily, London.